In the wholesome family cooking, there is nothing more appetizing than a so-called pollo alla cacciatora: chicken braised in a pan with various seasonings, the prototype of which is represented by the famous pollo in padella of Roman cuisine.

The chicken Ada Boni is referring to as pollo in padella is braised in a pan with lard, garlic, fresh marjoram, tomatoes and white wine, one of the many recipes generically known as pollo alla cacciatora. 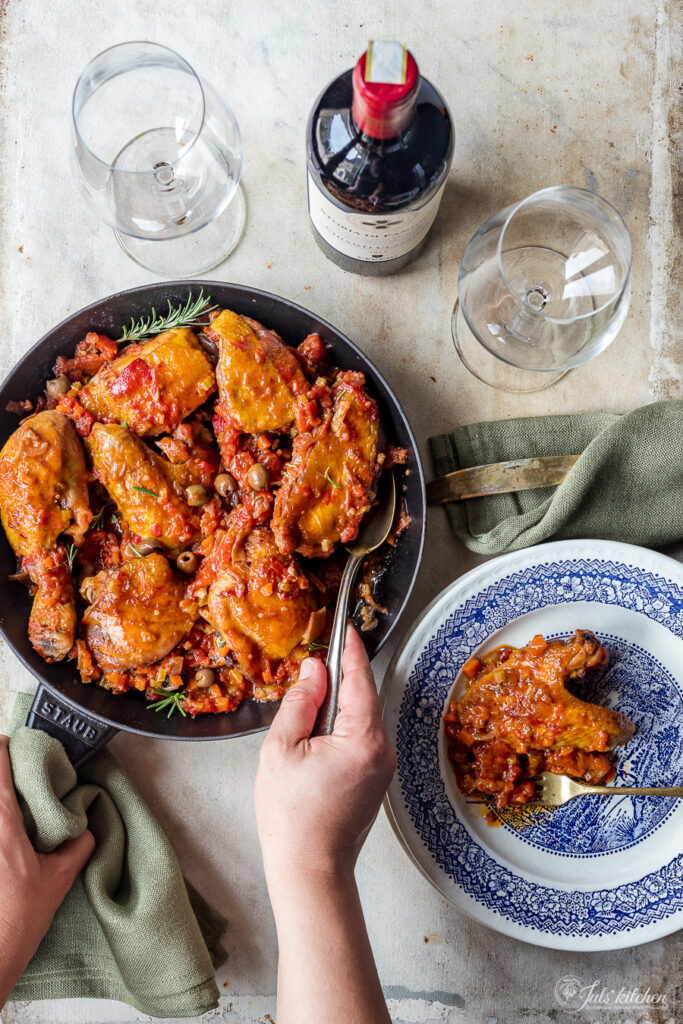 Every Italian region – but it would be appropriate to say every household – has its own version of chicken cacciatore, all equally authentic.

What makes a dish “alla cacciatora”? The meat of choice is that of a farmyard animal – not only chicken but often also rabbit or guinea fowl -, braised in a pan on the stovetop. It has a robust flavour, given especially by the thick sauce cloaking the meat. This rustic sauce calls for polenta, a crusty country loaf, or even a bowl of homemade egg noodles.

Chicken cacciatore can be cooked with tomato sauce, or without it – in this case, it would be called in bianco -, with white wine, red wine, vinegar or stock. It is a recipe born in the countryside, and as such takes advantage of the few seasonal ingredients that are easily available. Aromatic herbs, garlic or onion to give the basic aromas, sometimes accompanied by carrots and celery, as in the most classic Italian soffritto. Depending on the region, extra virgin olive oil, butter or lard will be used to brown the chicken. The season instead would influence the other ingredients, such as ripe tomatoes in late summer, foraged mushrooms, or preserved olives.

Its name, pollo alla cacciatora, means hunter’s style stew, referring to the habit of hunters to roast their preys with herbs, garlic, and a glug of wine.

For me, there is only one recipe, though, and it’s Zia Lina’s pollo alla cacciatora.

Zia Lina was my mum’s aunt, a strong, smiling, no-nonsense woman. She lived in the countryside near Barberino Val d’Elsa, in a farmhouse with a vegetable garden, an orchard, a vineyard, an olive grove and farmyard animals. When we visited her as a child, we would play outside with her granddaughters, and we would end up exhausted on the lawn laughing our heads off for nothing, looking at the sky and the clouds, breathing in the fresh air of summer evenings, the crushed dry mint and the jasmine tangled in the nearby fence.

Then she would call us from afar, and we would run to dinner, stealing pieces of hot rosemary schiacciata from the trays ready to be brought to the table as we passed by. We sat in a fresh cellar with a marble table and straw chairs. Chicken cacciatore was one of the dishes she cooked most often: at the end of the meal there was a thick, glossy sauce left on the plate, to be mopped up with the corners of Tuscan bread left on the table. 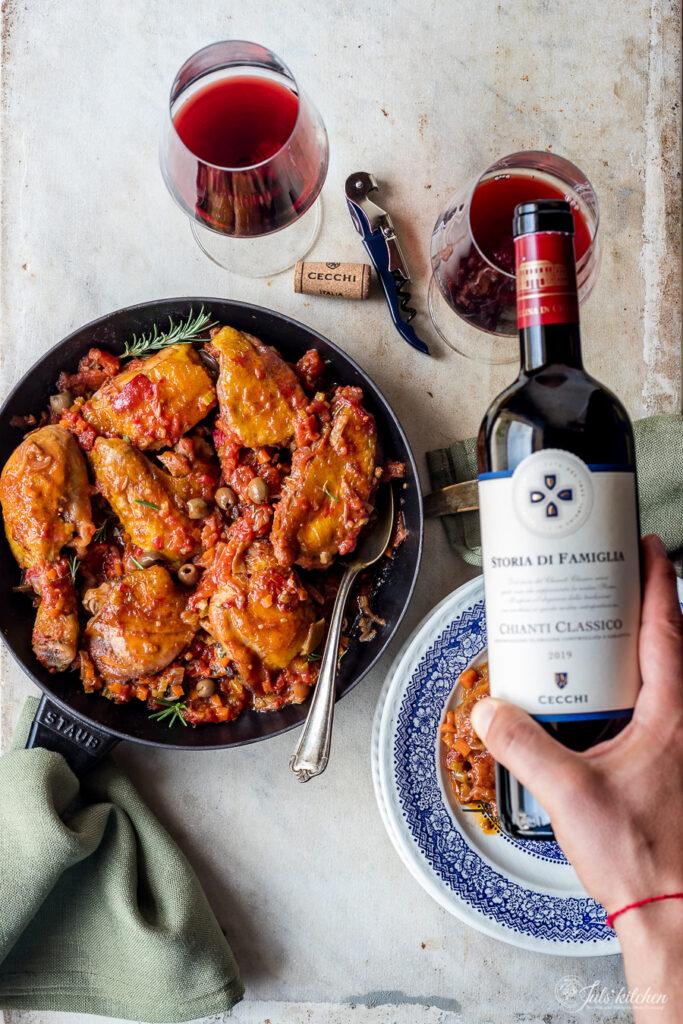 Recipe developed in collaboration with Cecchi.

The wine we chose today is Storia di Famiglia, the protagonist among Cecchi wines. It is the wine in which the company identifies more. His high profile is the result of a long experience. The Cecchi family has always believed in that name that represents the past, present and especially the future of Tuscan wines. Red ruby tending to garnet with ageing, fine nose, the taste is intense and persistent, its structure is large and with a great balance.

To accompany this Chianti Classico D.O.C.G., we chose chicken cacciatore, a dish that for us has a strong sense of family, a recipe whose simplicity and straightforwardness well represent our approach to cooking.

The tomatoes in this recipe are the last ripe tomatoes I picked from the garden, peeled and crushed by hand. It was my personal goodbye to summer, a way to welcome autumn, the time of stews, soups, and rustic sauces, when the vegetable garden flavours mingle with those of the fire, of a buzzing kitchen, of a table laid out for a family Sunday meal. 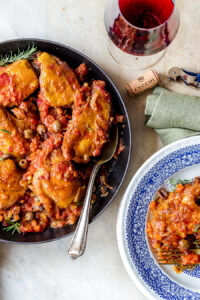 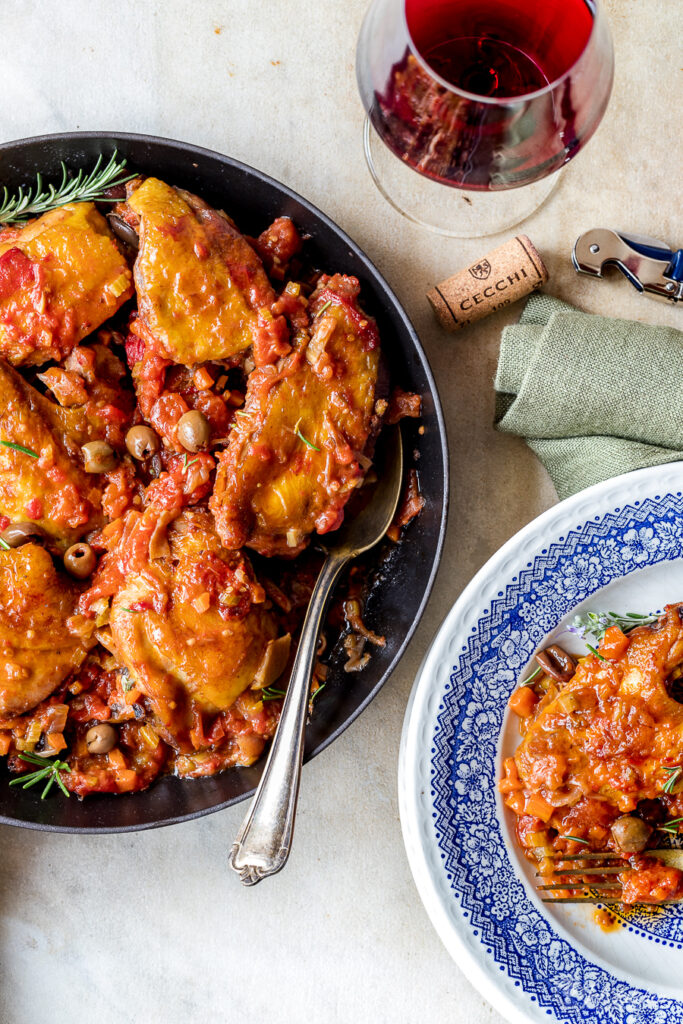 Here is my menu to say goodbye to summer. It has already the warm tones of autumn and the smells of a kitchen that is slowly getting ready to prepare soups and stews. 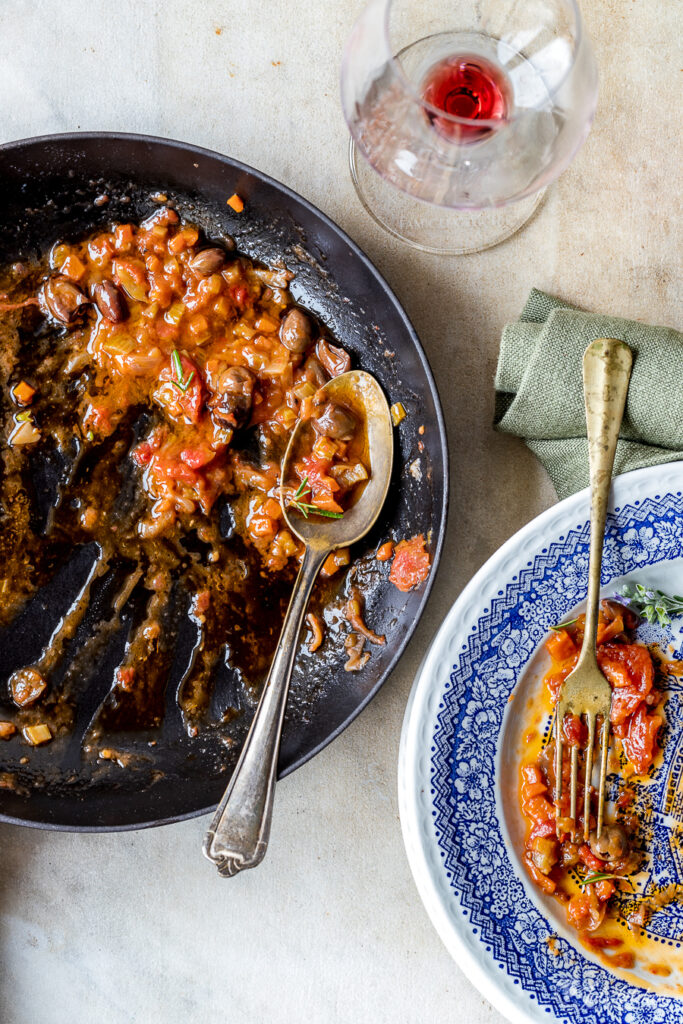 My Tuscan ragù and the Florentine penne strascicate