Ossobuco, a sliced veal shank, is one of the typical cuts of the Italian cucina povera, cheap but highly rewarding and satisfying if treated with care. The most famous ossobuco recipe comes from Milan. They braise the ossobuco in bianco, without tomato sauce, with onions, white wine, and beef stock, and serve it sprinkled with gremolata, a condiment made of finely minced lemon zest, garlic, and parsley, with saffron risotto.

In Tuscany, we braise it in tomato sauce, with a generous base of battuto – minced vegetables such as onion, carrot, and celery. Serve it with a spoonful of soft polenta, some boiled potatoes, or only a loaf of bread, which will serve both to mop the sauce on the plate and to spread the marrow on it.

Scooping the marrow from the bone and smearing it on a toasted slice of bread is my favourite part of the ossobuco eating experience, and this is probably the reason I had to learn how to cook them properly. 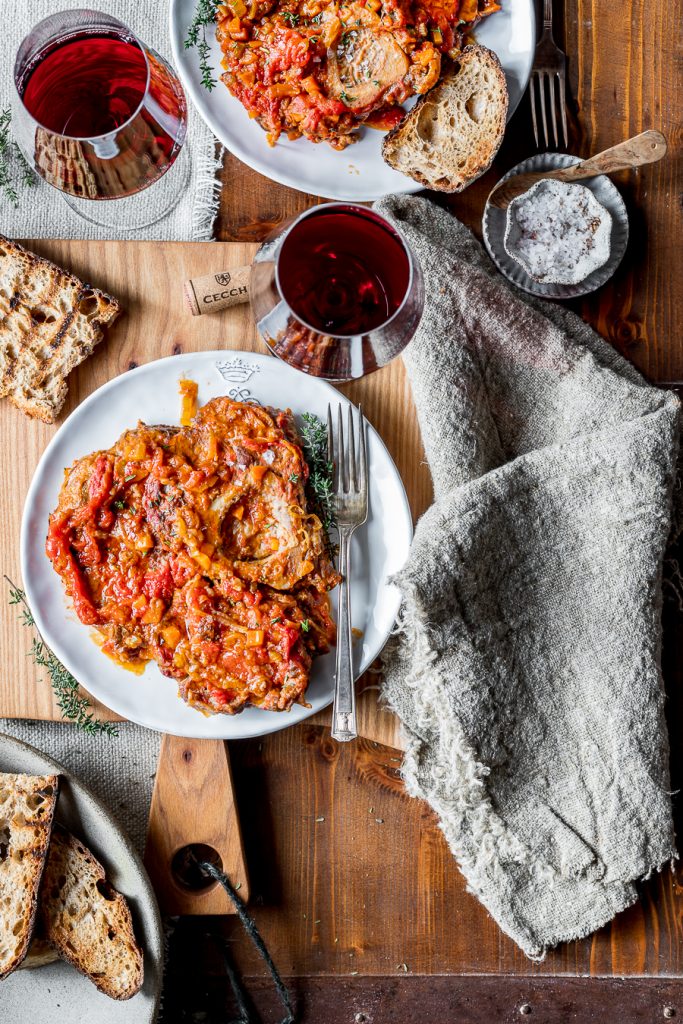 How to cook the braised veal shank

I’ve always been intimidated by ossobuco because I thought it wasn’t easy to cook them and have soft, tender meat. But the secret is still the same, be patient, cook the ossobuco over a gentle heat for at least an hour and a half. The other trick is to cut the skin surrounding the meat, or remove it completely, to prevent it from curling during cooking.

Last note, the size of the pan. The veal shanks need space in the pan to cook evenly. You can brown them one after the other initially, but then they need space when it comes to braising, with the tomatoes and the minced vegetables. I usually cook just two veal shanks, on for Tommaso and one for me. But when I had friends over for lunch, I have always preferred to cook them in two different pans simultaneously. I felt like a bit of a juggler, but I managed to cook the ossobuco to perfection. 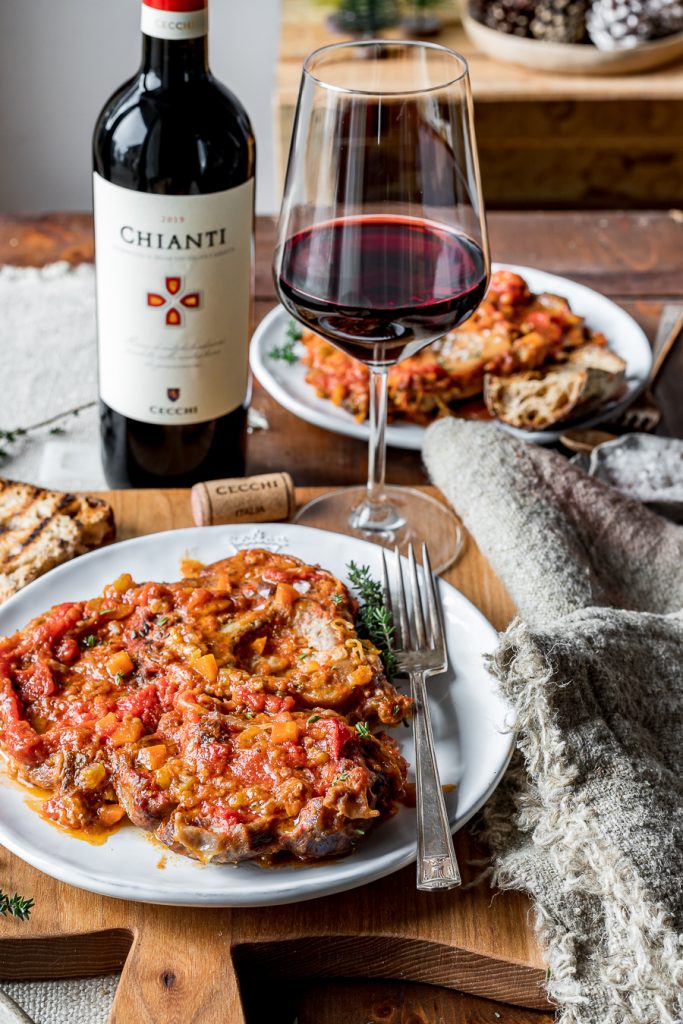 Recipe developed in collaboration with Cecchi

The wine we have chosen for today’s recipe is a historic Cecchi label, the Scudi Chianti, which represents the company’s Tuscan roots. It is a wine with intense and persistent aromas, soft and balanced on the palate. It complements well red meats and cheeses. As this wine is so rooted in this territory, we have paired it with an equally local dish, ossobuco alla Fiorentina, a braised veal shank. 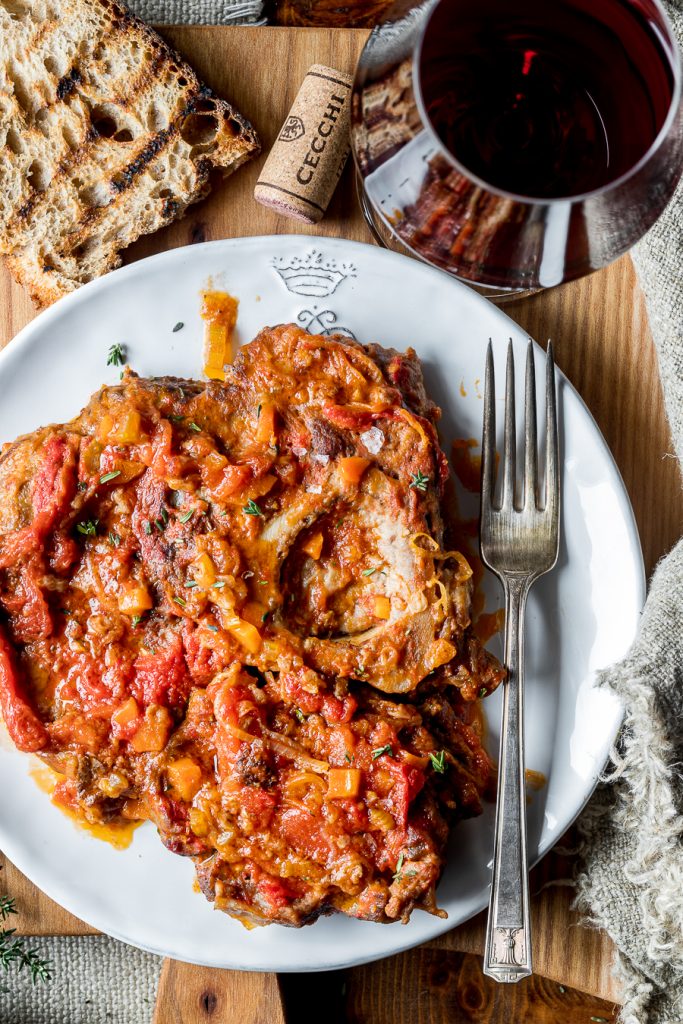 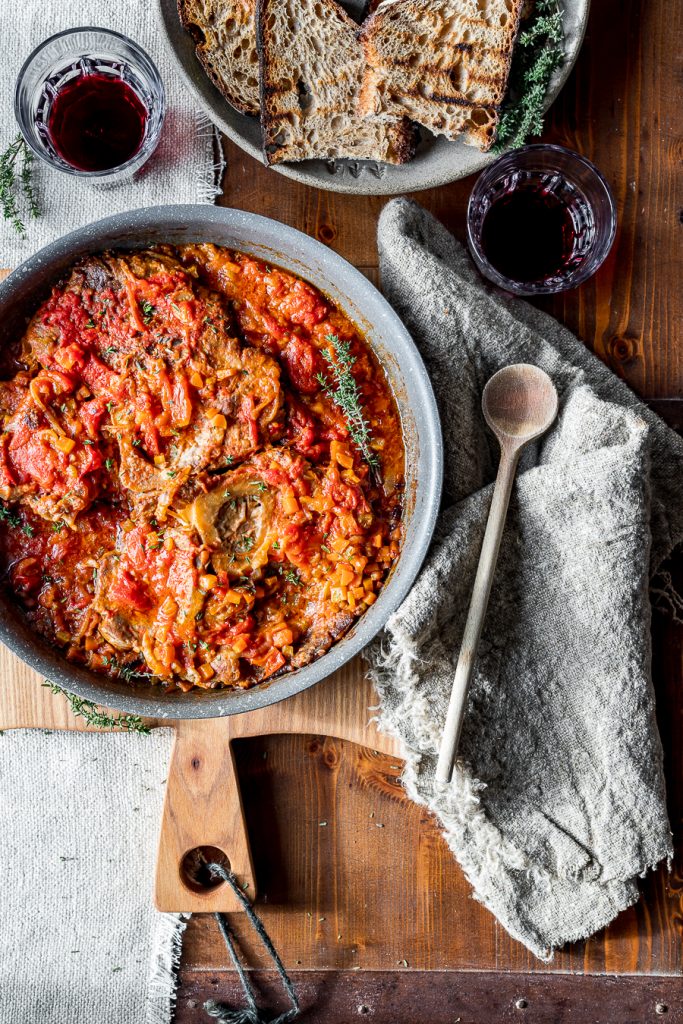 Serve the braised veal shank with…

Let’s pretend we are sitting at a communal table in a Florentine trattoria, one of those long marble tables with yellow paper placemats and a menu written on a typewriter. For the first course, we will go for a trattoria classic, penne strascicate, then we’ll have ossobuco – and make sure we have a basket full of bread – and maybe we will order the sautéed spinach as a side dish. We will close the meal with a slice of torta della nonna, an espresso, and then off to explore the city, as we once used to do, as I hope we will soon do again. 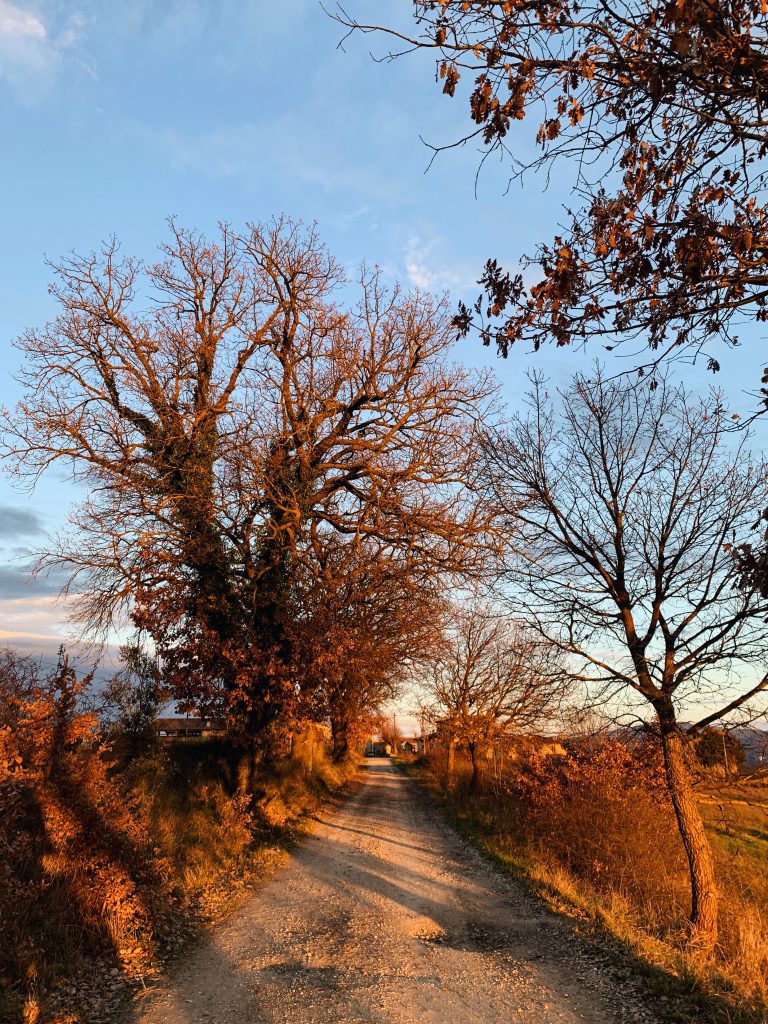 I am traditional, irreverent, nostalgic. Sausage meatballs with stewed beans