I’ll bring some cheese on the table. Almost every dinner ended like this. During the first years of marriage mum gradually learnt to cook: she had never been adventurous, never had the curiosity to experiment with new recipes, but she had always put all the dedication and love of a newly wed bride before and a young mum after.

She had little time once back home from work: clothes to be ironed, a house to be cleaned, a little girl to play with, then two… she made up for the lack of cooking experience and organization with the typical generosity of an Italian woman. The cheese was always present, it would end up an impromptu dinner or help a not too successful one. Mum would take some cheese out of the fridge: it was always Pecorino Toscano. Sometimes it was fresh, soft, a delicate aroma of butter and hay. When in season, she would peel a ripe pear and I would eat them together, the most perfect dessert: the sweet and juicy pear and the fresh milky pecorino teamed up to perfection.

Sometimes she would share a slice of aged Pecorino, directly crumbled over pasta, or sliced and accompanied by some crusty bread. The aged pecorino was intense and nutty. I have always preferred the fresh one, more delicate, while mum and dad would fight for the last crumble of aged pecorino. Today, after more than thirty years, mum is a good cook. When I do not feel like cooking dinner, when I am too tired or I wish I could live in the city for one night to have pizza or sushi delivered to my door, mum is my take away solution, my favourite trattoria where there’s always a table for two in a corner. The Tuscan Pecorino or, for us, simply the cheese, is always present on our table.

When I moved on my own I began to buy my own pecorino: first at the supermarket, then at our weekly market, now directly from some local producers. Even if my fridge and pantry are full, I feel there’s something missing if I do not have at least one slice of pecorino. I grate the pecorino over a bowl of pasta, stir it into a creamy risotto, serve it as an appetizer during cooking classes along with honey or onion jam. It helps me to serve a decent dinner when I completely forget that it is time to cook and Tommaso shows up hungry in the kitchen. It is an ingredient in many recipes but also something that you can enjoy on its own, with a glass of wine or fresh fava beans.

Then, it is with undisguised pride that I introduce you this new collaboration with the Consortium of Pecorino Toscano PDO. In the upcoming months I will share with you how to use the fresh and aged Tuscan pecorino in simple recipes for a midweek dinner, for a Saturday night at home or for a crowd of old and new friends. Let’s start with one of the most representative recipes of the area of production of Pecorino Toscano, pici, thick home-made spaghetti which are typically made in Val d’Orcia. It is probably the simplest fresh pasta you can learn to make, as it only requires two ingredients, flour and water, and no other kitchen appliances but a rolling pin and a pizza cutter, or a good knife.

During my cooking classes pici impress everyone when they realize how simple and intuitive it is to roll them out: it is exactly like playing with play doh. In making pici you become a child again and while you eat them, thick and chewy, more doughy than dry spaghetti, you will suddenly find yourself among the velvet hills of Val d’Orcia, one of the most beautiful landscapes in the world. But let’s look at the recipe in detail, let me see if I can convince you to make them during the holidays: this time the pici are made with plain wheat flour and a part of wholemeal rye flour, which gives even more texture and flavour to these home made noodles.

The dressing is seasonal, my pièce de résistance during autumn cooking courses: butternut squash and leeks cook on low flame doused with extra virgin olive oil until they become a sauce, crumbled fresh sausages add a savory and peppery note and a generous handful of fresh Pecorino Toscano PDO melts in the pan and embraces the pasta.

You can prepare these pici with their butternut squash and sausage dressing in about one hour. Have I convinced you to try them? 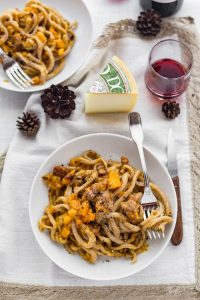 Ingredients for the pici

Ingredients for the seasoning From the Medieval frescos to our table: tagliatelle paglia e fieno with Cinta senese meat sauce

On fifteen hundred ricotta ravioli for our wedding and how to make them.
cheeseflourpecorinosausagesquash