It has been a year since we began a tour of Tuscany with Ventura. For you it has been a virtual journey, scented with spices and nuts and done through local and traditional recipes. For me it has been a real journey made across Tuscan villages and cities, a journey of growth and knowledge, during which I met people generous with friendship and recipes.

In a January perfect for new beginnings and good intentions we embarked in this new adventure in Lunigiana, a mountainous border area between Liguria and Emilia Romagna, with a recipe from Pontremoli, the spongata. Apparently the spongata has Jewish origins, as it arrived in Italy in the sixteenth century, brought by Sephardic Jews fleeing the Spanish Inquisition.

After almost a year we reach another border land, Maremma, which gently fades into the sea and the Lazio region, and we find another recipe which is closely linked to the Jewish tradition, the sfratti from Pitigliano. Pitigliano, a medieval village in the Tuscan Maremma built on tuff as the nearby Sorano and Sovana, was known by the Jews of Livorno as Little Jerusalem: since their arrival in the fourteenth century, the Jews in Pitigliano constituted a large percentage of the population of the village. They were highly educated people, professors, architects, astronomers, musicians, but also tailors, photographers and mechanics.

In 1556 the nobleman Nicola IV Orsini donated to his personal physician, David de Pomis, a piece of land to build the first Jewish cemetery. In 1598 the Synagogue followed. When the County of Pitigliano was annexed to the Grand Duchy of Tuscany in 1608, the Medici instituted the Ghetto.

Many are the reasons that led to this incredible concentration of Jews in a Tuscan village, not least its location, so close to the borders of the Papal State, from where Jews were often expelled. Pitigliano, first with the Orsini and later with the Medici, offered a guarantee of freedom and peaceful cohabitation with the Gentiles. For centuries the Jews and the Gentiles lived side by side, respecting each other’s traditions. With the unification of Italy, in 1861, all the Jews were emancipated and many abandoned Pitigliano to move into larger cities like Livorno, Rome and Florence. With the racial laws and anti Semitic propaganda the community shrank dramatically. During the Second World War the few remaining Jews in Pitigliano were helped by the families of the village, who hid them in the countryside, or fled with the partisans.

The history of this community, its poignant memories, its traditions and its recipes are vividly reported in Edda Servi Machlin’s book, The Classic Cuisine of the Italian Jews: Traditional Recipes and Menus and a Memoir of a Vanished Way of Life. It is much more than a cookery book: Edda Servi was born in Pitigliano in 1926, where she lived until the war. She escaped the extermination camps by living with the partisans on the hills. After the war her family moved to Florence and in 1958 she definitely moved to the US. Her book is a tale of a now vanished life, punctuated by religious festivals and menus encoded into the Jewish Italian tradition. In Pitigliano you can still visit the old Jewish Ghetto, the Synagogue and the Jewish Museum. You can explore the premises once occupied by the kosher butcher, the cellar and the bakery, which they would open just once a year to bake the cakes and the unleavened bread for Passover.

The same photographs that you can see in Edda Servi Machlin’s book are hung on the walls of the old Jewish quarter. In the photos’ captions you can read the names of the people who once filled those rooms with laughter, ritual songs and stories, in a short circuit between history and shared memories. The sfratti are the typical walnut and honey pastries of Pitigliano, still baked and sold in the bakeries and pastry shops of the village. They have the shape of a stick, a filling of chopped walnuts, honey, spices and orange peel covered with a thin unleavened pastry dough.

The etymology of their name, sfratti, which in Italian means eviction, explains also their origin. They represent the rods with which the Jews were evicted from their homes during persecutions. According to a story told in the Jewish bakery of Pitigliano, the name of these pastries ironically refers to the sfratto of Cosimo II de’ Medici, who in the first years of the XVII century, gathered all the Jews of Pitigliano in one neighborhood, the ghetto, evicting them from their homes In an ironic and symbolic reversal of their meaning, the sfratti were prepared and eaten for the celebrations of Rosh Hashanah, to ward off the possibility of future persecutions and as a wish for a new prosperous year. The Christian Pitiglianesi appreciated the sfratti and adopted them, baking these pastries for weddings to prevent battles within the future couple. Nowadays you find them in bakeries and you can enjoy them throughout the year with some vinsanto.

The recipe is adapted from Edda Servi Machlin’s one that you can find in her book The Classic Cuisine of the Italian Jews: Traditional Recipes and Menus and a Memoir of a Vanished Way of Life. Unfortunately, it is a rare book now, but if you stumble upon it on a second-hand market, buy it and cherish it as befits valuable things, because it is difficult to find such a good a book, with authentic recipes of the Jewish Italian traditions and stories and memories of a past life. 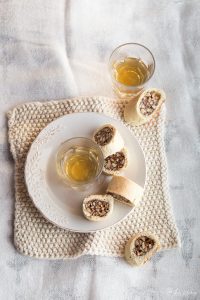 Walnuts have an adult taste, they usually come after almonds and hazelnuts in everyone’s taste. Yet, in the Tuscan imagination and tradition, walnuts and walnut trees are part of myths and legends, stories about witches and the rituals of the nocino liqueur that is prepared during the night of Saint John. Here on the blog you will find many recipes with walnuts, although the easiest one is perhaps one of my favourite breakfast: a slice of fresh bread, chopped walnuts and a drizzle of honey. Together with Ventura in the past year we have traveled through Tuscany to discover typical local recipes made with nuts and dried fruit, such as hazelnuts, walnuts, pine nuts and almonds. They become cookies, cakes and breads with a distinct local touch. Here a recap of our tour, which now comes to an end. Necci, Tuscan chestnut pancakes. As easy as that