Lately I spend several days a week in Florence. I’d rather have a tomato bread soup made as the Florentines do than how my grandma taught me, which is the Sienese way. Please, don’t tell her! Despite this, I am still deeply attached to my land and my culinary traditions, born and breed in the area around Siena, where you are surrounded by olive trees, vineyards, rolling hills, scattered cottages and gravel roads.

This is a land of reserved people, olive oil mills and wineries, bread and bean soups, wild herbs foraged along the roadside, Ricciarelli, panforte and cavallucci when Christmas comes, St. Joseph fritters made of rice, tripe and Cinta Senese. 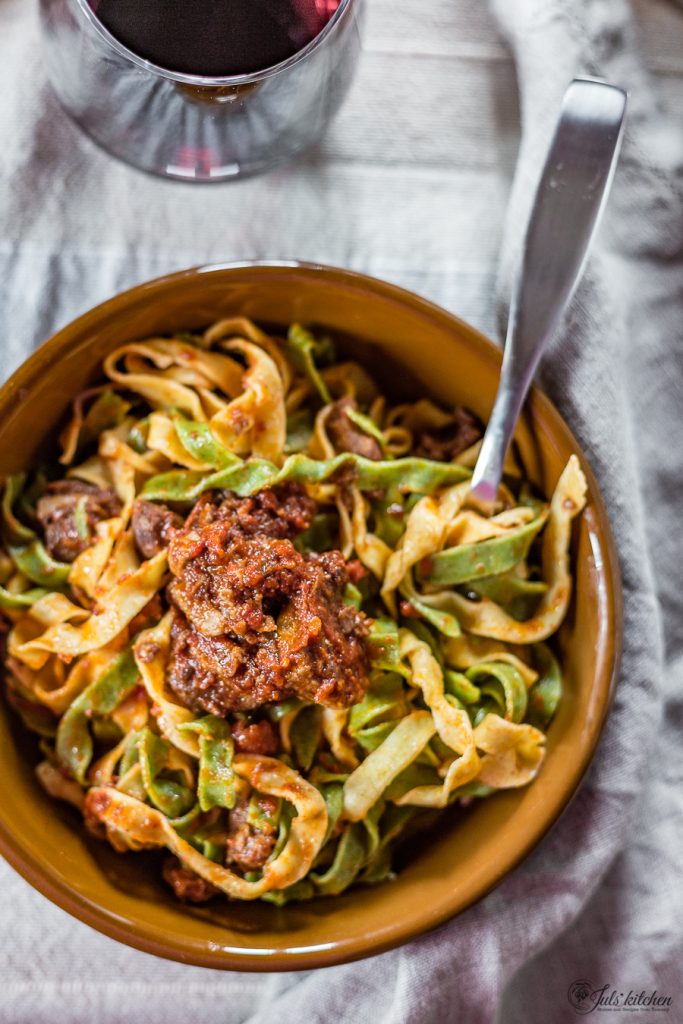 In Siena, right in one of the main halls of Palazzo Pubblico, the public building overlooking Piazza del Campo, there is the famous Buon Governo fresco, painted by Ambrogio Lorenzetti in the XIV century. This fresco represents the allegory of the good and bad government in the city and in the country. In the side dedicated to the effects of good governance in the country there is a farmer, dressed in the fashion of the time, pushing a Cinta Senese. The animal is portrayed with accuracy and authenticity, characterized by the white belt (in Italian cinta) encircling the chest and by white front legs.

Despite this fresco dates back to the fourteenth century, there is evidence that the Cinta Senese was reared in these areas since the Etruscans and Romans, becoming the progenitor of all the Tuscan pork breeds.

Its natural habitat is the Montagnola Senese, the hills I see every day from my window, covered with holm oak woods. The Cinta Senese is a strong and sturdy breed, suitable to be bred in the wild. Its floppy ears cover the eyes, protecting them when they run wild in the shrubs of the underbrush in search of acorns, roots and tubers. 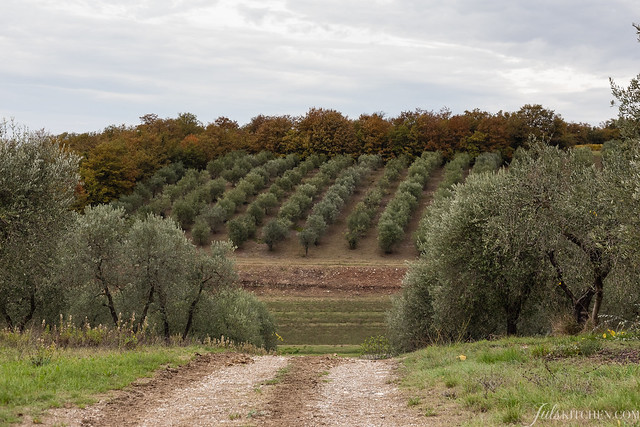 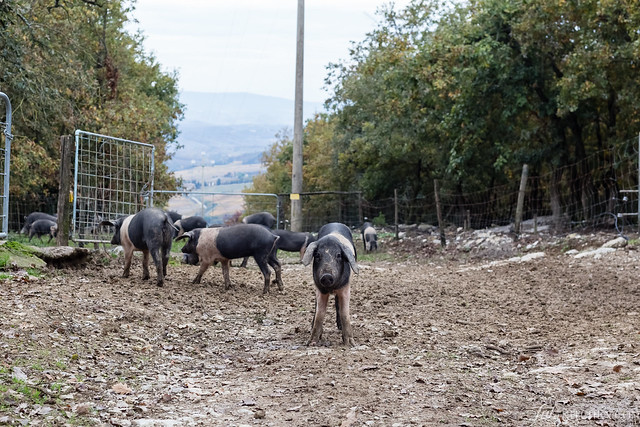 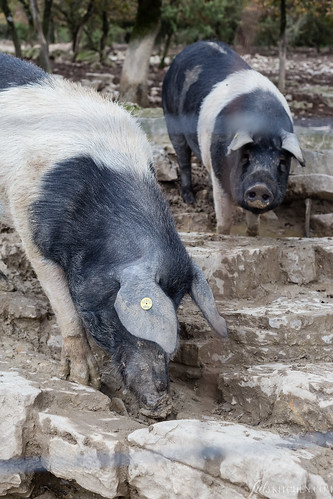 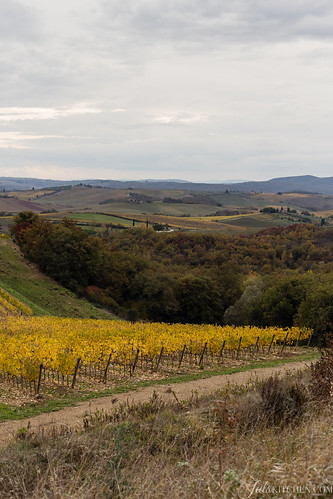 Until the ’50s almost all rural households raised the Cinta for their own consumption, then slowly, since the Large white breed was introduced, the Cinta gradually disappeared, risking the extinction. Grandma told me that she remembers just white and black pigs, no cinta at all.

Luckily, in recent years local organization and the Consortium of the Cinta Senese have worked to ward off this extinction risk. The Casamonti farm has played a key role in this process. Raymond Lamothe, the owner, is one of the farmers who most fought to save the Cinta and still demonstrates an unwavering commitment to quality and honesty.

The farm has about 500 animals, smart and clean, which are bred free range in their 65 acres of woodlands. They have a varied diet, consisting mainly of what they can find in the woods – acorns, truffles and mushrooms – integrated with specially formulated cereal mixtures. 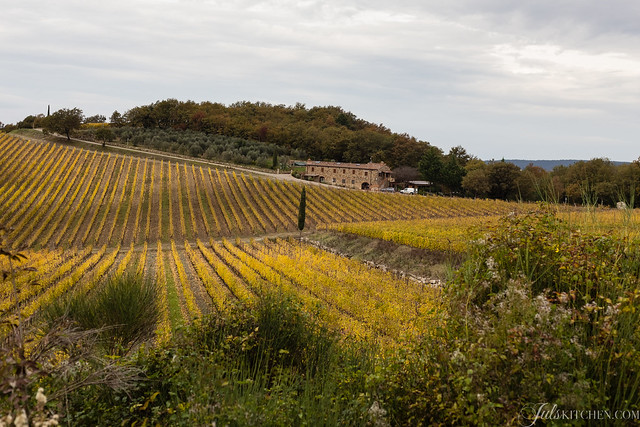 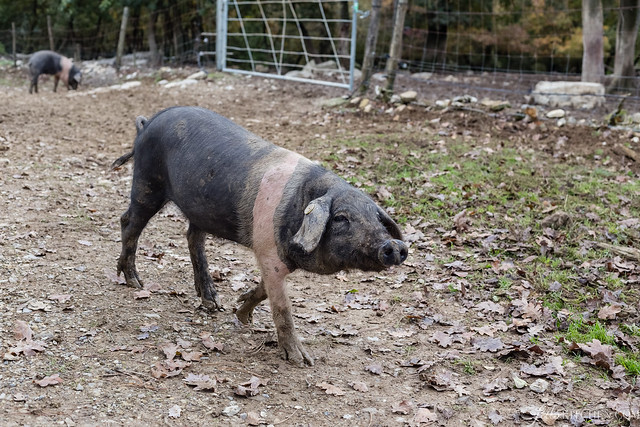 Casamonti has also an estate salumificio, their own laboratory, as to ensure the highest quality control of the finished products: ham, salami, finocchiona (crumbly salami with fennel seeds), capocollo (cured pork meat from the neck muscles), lardo, guanciale (Italian bacon made pig’s jowl or cheeks), bacon, sausages… everything is done by the rule book, following the right steps, without hurrying the process based on the butchers’ experience, only with the best spices. These are the secrets: honesty, patience and excellent ingredients.

Just imagine: to make a Cinta ham, which is recognizable by the presence of the black hoof, the pig’s legs are massaged by hand with a rolling pin, then are hung to be cured for two years.

The Cinta breed has also a unique DNA, a darker meat, a more intense flavour due to its free range breeding, a tasty fat that melts during cooking (and in your mouth) and most importantly, recent scientific studies have shown that contains unsaturated fatty acids, like Omega 3 and Omega 6. 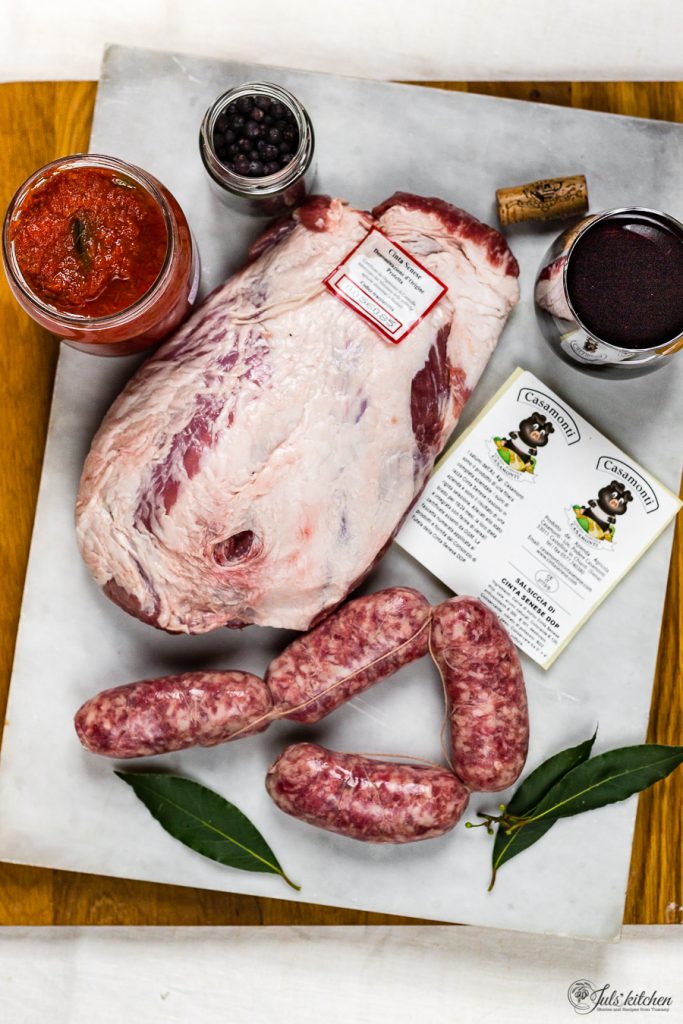 I’ve met Ray and Anna Rita, Raymond’s wife, a few years ago and since then we’ve become friends. They gave me some good advice on how to cook the Cinta Senese: it is an excellent meat, though it tends to become tough on high heat. Therefore it requires a longer cooking on low flame, it takes almost twice the time of the common pork meat.

Vetrina Toscana asked me to take part in a special project aiming to promote the Tuscan region and its best products. I’ve been given Cinta Senese and the Sienese area as focus, to my delight and happiness. Raymond gave me a generous piece of shoulder and some fresh sausages. From here I was supposed to cook something that could show the unbreakable bond between cinta senese and its territory. You can guess that I cooked up a storm. 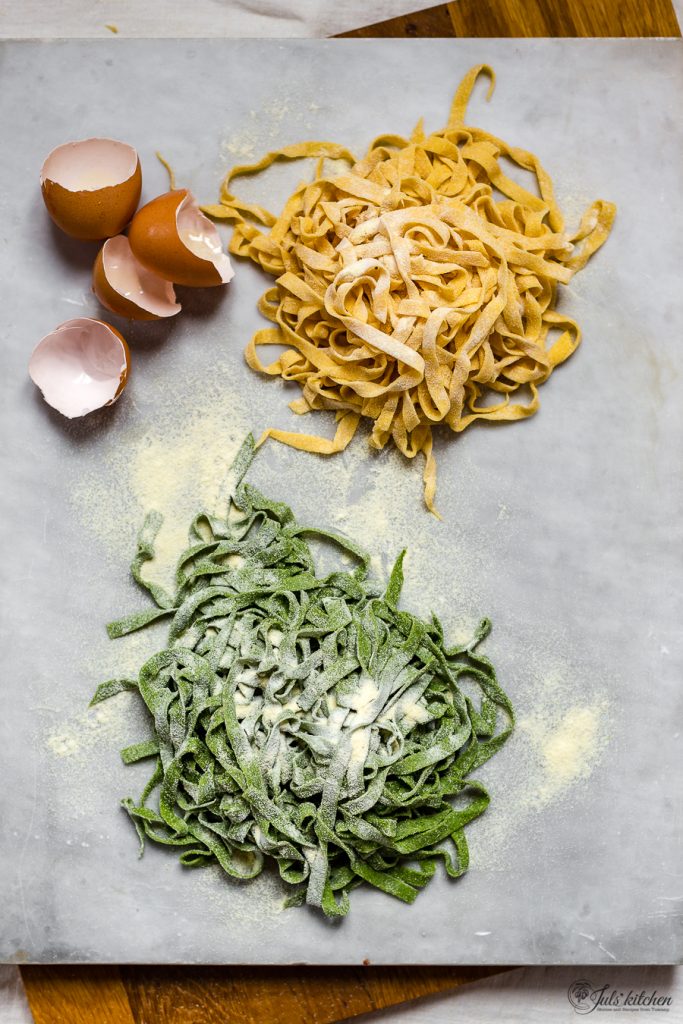 I began with home made fresh pasta, as if I want to make something special, I always end up there. The smell of semolina flour, mixed with eggs and olive oil, is one of the most primitive smells I know. It reminds me being at home on a Sunday morning, a labour of love, generous dished filled up to the bream with a large serving of steaming pasta, something which was allowed way before diets and intolerances. Fresh pasta is one of the recipes that made me discover my huge passion for cooking, I could only start from here.

But these are not simple tagliatelle, these are called paglia e fieno, straw and hay. The yellow tagliatelle, straw, are prepared in the traditional way and have a nice warm colour given just by the use of semolina flour, more rough and rustic than the plain flour. The green tagliatelle, hay, are made just by adding a handful of cooked and well-drained spinach to the mixture.

Grandma used to make them often on Sunday, making a quick sauce with butter, tomato paste, oregano and cooked ham. It was a rustic, peasant, colourful and welcoming first course. I wanted my recipe to convey the same home feeling. 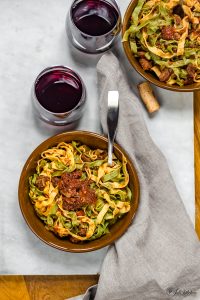 For the yellow tagliatelle (straw)

For the green tagliatelle (hay) 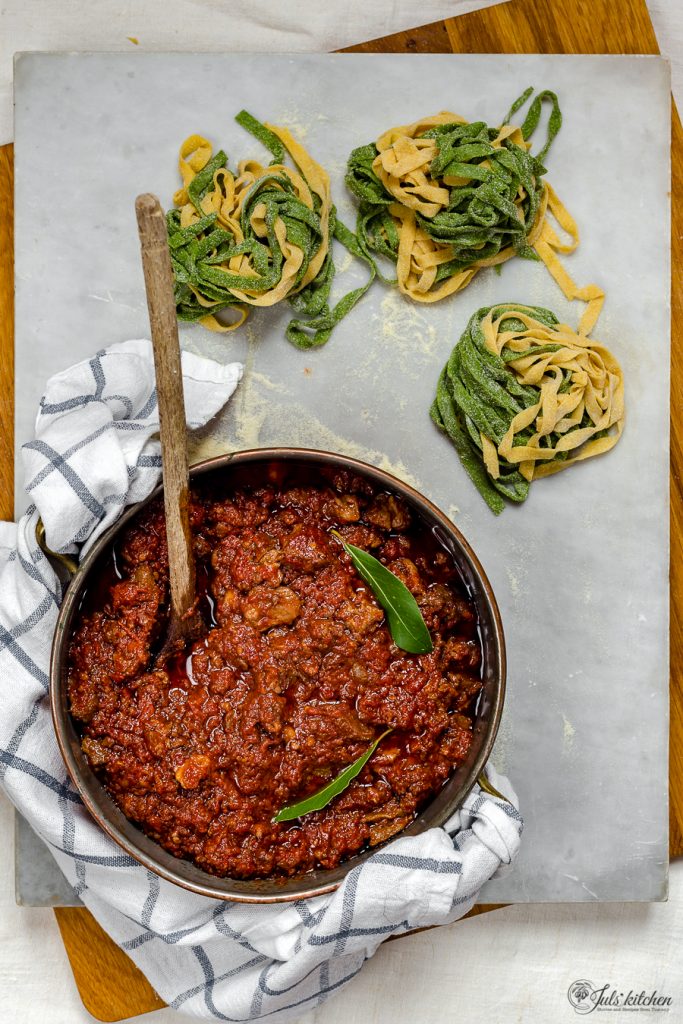 The pork shoulder and the sausages became instead a rustic meat sauce, enriched by those herbs and spices which are typical aromas in this rural area, bay leaves and juniper, also suitable for game, which are well matched to the intense flavour of the cinta senese meat.

The sauce, cooked slowly on low heat, mixed with patience and love with a wooden spoon, is cooked with tomato sauce, a jar made by mum in the summer, and red wine, a Chianti of course, to remain in the same area.

With these ingredients you get a sauce that’s enough to satisfy more than ten people: I froze half of the sauce for some special occasion, using what was left to season the tagliatelle. However, the meat sauce is so good and tasty that even eaten with a slice of fresh crusty bread would become a lunch suitable for a king. 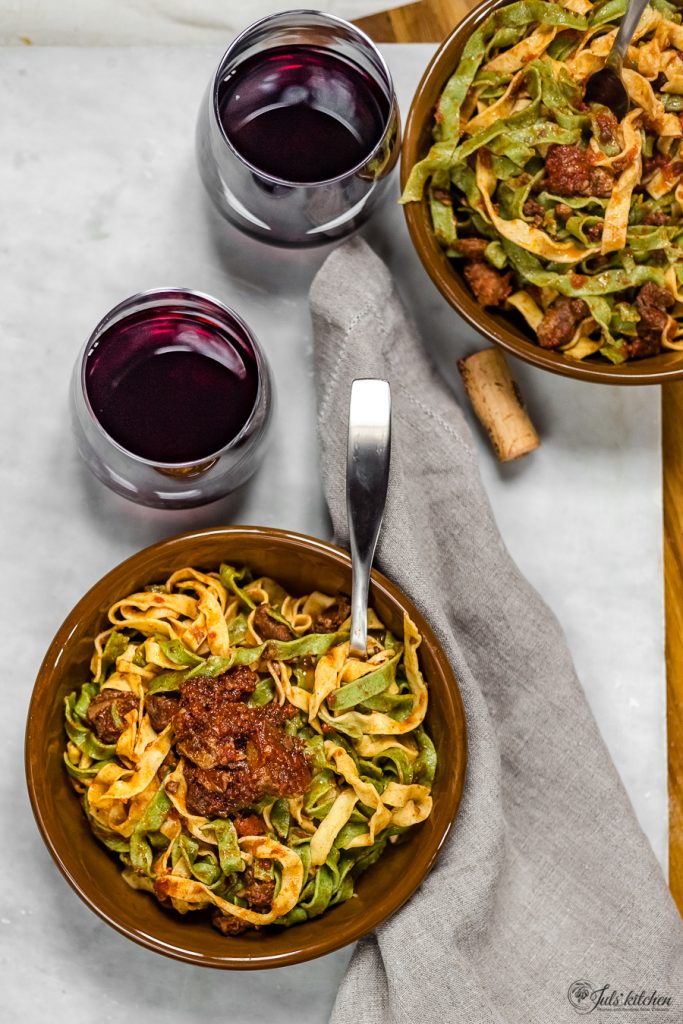 Now you just have to cook the pasta in boiling salted water, drain it and season it generously with the Cinta Senese meat sauce.

With this dish, sitting comfortably at a table with friends and family, you will actually feel in the Siena countryside, on a November Sunday, with the mist that gets caught in the yellowed vineyards and a crackling fire in a fireplace that warms your shoulders.

This is the magic of cooking: you can celebrate a region, a tradition and a strong connection between the product and its territory simply by reproducing recipes that have behind authentic and original stories. This is just a recipe with a view… 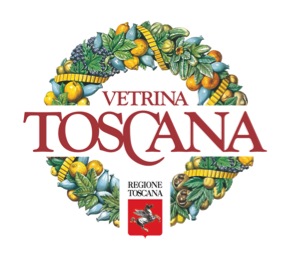 My love for Pecorino Toscano PDO and pici with squash