I went back to my room sitting on a wheelchair, wrapped in a clean nightgown. The night before, when I was in labour, those corridors had seemed interminable, a labyrinth that I had walked through with several stops, holding on to Tommaso when the pain was too much to handle. Now I realized they were just a short walk.

In the room I met another new mum, laying on her bed and chatting with her baby, who was born a few hours before Livia. There was also a tray on a corner table waiting for me, with my lunch inside, now cold.

I had had my last meal the night before when, watching Wonder Woman in between contractions, Tommaso had heated a frozen pizza in the oven. I had been told to stock up on easy-to-eat carbohydrates to cope with labour. We started with pizza and then moved on during the night to spoonfuls of honey – from the last jar left from our wedding reception – which I alternated with hot showers and a few minutes of sleep to recover my strengths.

The hours passed between the frozen pizza and that hospital lunch appeared now vague. Some had seemed fast, others slow and muddy. Tommaso and I, during the skin to skin time with Livia, had told each other about that hours, to relive them and understand them, to savour them, to exorcise fear, to realize that we were indeed the spectators and the protagonists of that miracle. 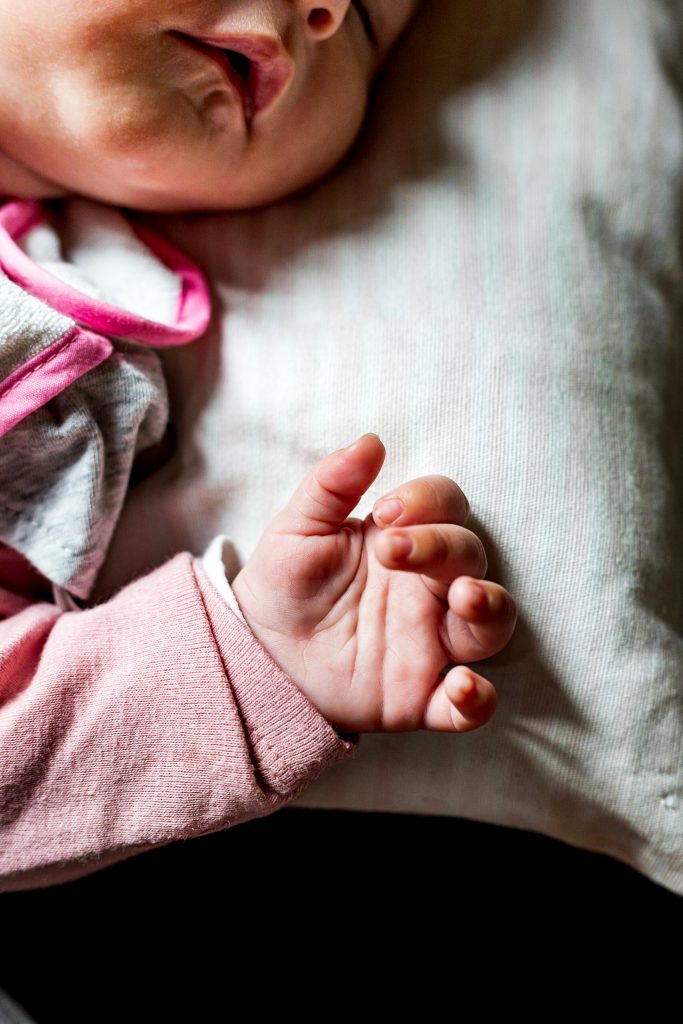 With unsteady legs, I moved on the red plastic chair next to the table in the corner. Tommaso had gone back home, as for the hospital Covid policies he could only stay a few hours a day. He would return in the late afternoon, the moment when nostalgia and melancholy grow stronger.

Livia was asleep in her cradle. I arranged it next to me, so that I could keep an eye on her, so as not to miss a sigh from that new baby, still exhausted from that long journey that had brought her among us. With one finger I ran along the curve of her cheek, the arch of her eyebrows, looking for similarities that I still couldn’t recognize.

Once I was sure that yes, it was all true, I turned to my lunch tray.

The pasta was now overcooked, with the tomato sauce encrusted on the penne. The roast pork was a pale imitation of what I often do during classes, the mashed potatoes were now glue. 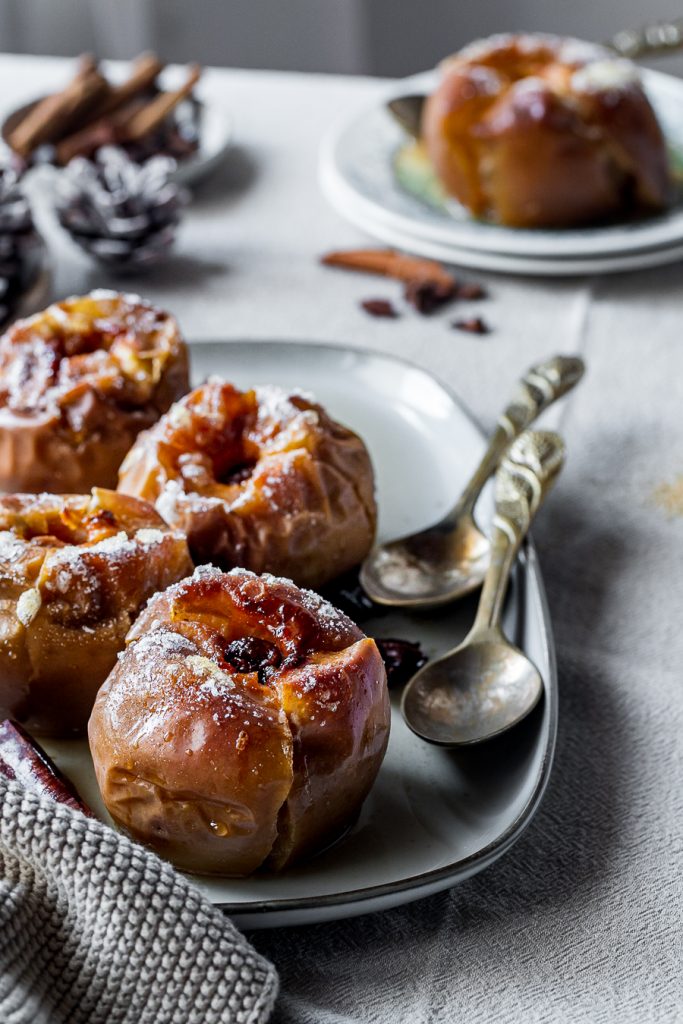 Then there was a baked apple in a white plastic bowl.

It was cooked simply, without sugar. It had still the core. The peel was wrinkled, but the inside creamy, it surrendered to the spoon. I started hesitantly, but then I ate it voraciously, facing the wall, with my hands, holding it by the stalk, licking my fingers. Naturally sweet, soft, comforting.

I found in that tray the food you crave when you are not feeling well, when you need an extra cuddle, a personal comfort food, a childhood memory that welcomed me into my new life as a grown-up, as a mother.

In the following days, I chased that baked apple from meal to meal. Every day I was offered a choice of dishes to make up my menu for the following day, but then an inexplicable short circuit happened every time. I would choose the gnocchi with ragù, and in uncovering the dish I would find a semolina soup. I would ask for grilled vegetables, and instead they would bring me a plain wilted salad. But above all, every time I hoped for the baked apple, and instead three unripe plums magically appeared on the tray. I put all those plums aside and took them home: we ate them a month later, finally ripe.

Food is one of those elements that helps you get back on your feet faster, along with a good night’s sleep.

In the first days as a new mother, though, you certainly can’t count on sleep, so I hoped to be able to at least rely on food. But this is not the time and place to analyse the culture of food in Italian hospitals, because there would be so much to write about.

Luckily Tommaso, who would go back and forth between home and the hospital, every day brought me all those foods that I had missed during pregnancy, along with the provisions that my mother would send me. Pasta with basil pesto, freshly sliced Tuscan prosciutto, a schiacciata baked the day before in the wood burning oven, a fresh melon already cleaned and sliced, a bag of fruit, of ripe fruit.

He even went so far as to smuggle in a 200-gram beef tartare to the hospital, hand cut by our butcher friend, along with a bottle of extra virgin oil, a lemon wedge, pepper, and Maldon salt. The tartare came along with the news that I had to stay one more day in the hospital, and I welcomed it laughing and crying, with that mix of feelings, hormones and tears that identify the first days of a mother.

Once back home, I tackled all my cravings, gradually ticking off that imaginary list that I had compiled during pregnancy: a fried egg, with a soft, runny, honey like yolk, a thin slice of cured lard, imperceptibly melting on warm toast, pan fried liver with sage, raw milk cheese.

And most of all, I started making pans of baked apples. 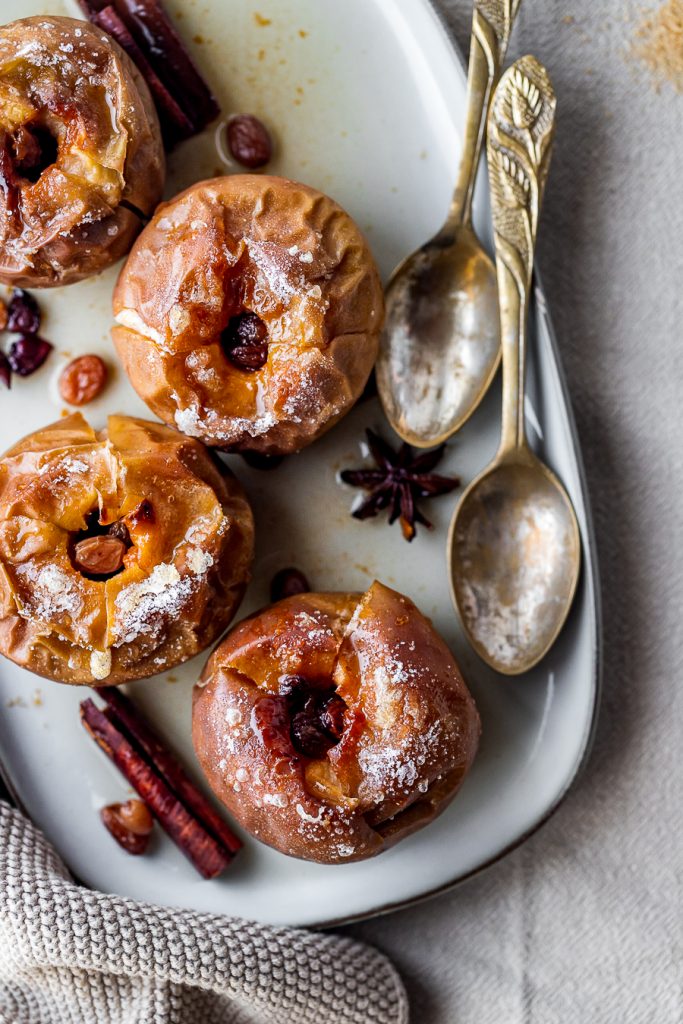 Now, I prepare a pan of baked apples at least once a week. I bake six or eight apples, depending on the size. I remove the core, place them side by side in a pan, add a handful of raisins, a dusting of cinnamon, a spoonful of sugar or a drizzle of honey, a splash of water or lemon, and then they go in a hot oven, until the peel becomes golden and wrinkled, the inside soft, melting.

Prepare more than you plan to eat. They keep well in the fridge, kept in Tupperware. Oh, the comfort of knowing that you’re stashing baked apples in the fridge for when you feel like it. Then just reheat them in the microwave or in a double boiler for a few minutes before eating them.

Which apples to use?

Here it really goes according to your taste. I tried them all: Golden Delicious, Renette, Granny Smit … but the ones I prefer are Gala or Fuji, because, once baked, the pulp becomes creamy, but they do not tend to explode like the others do. 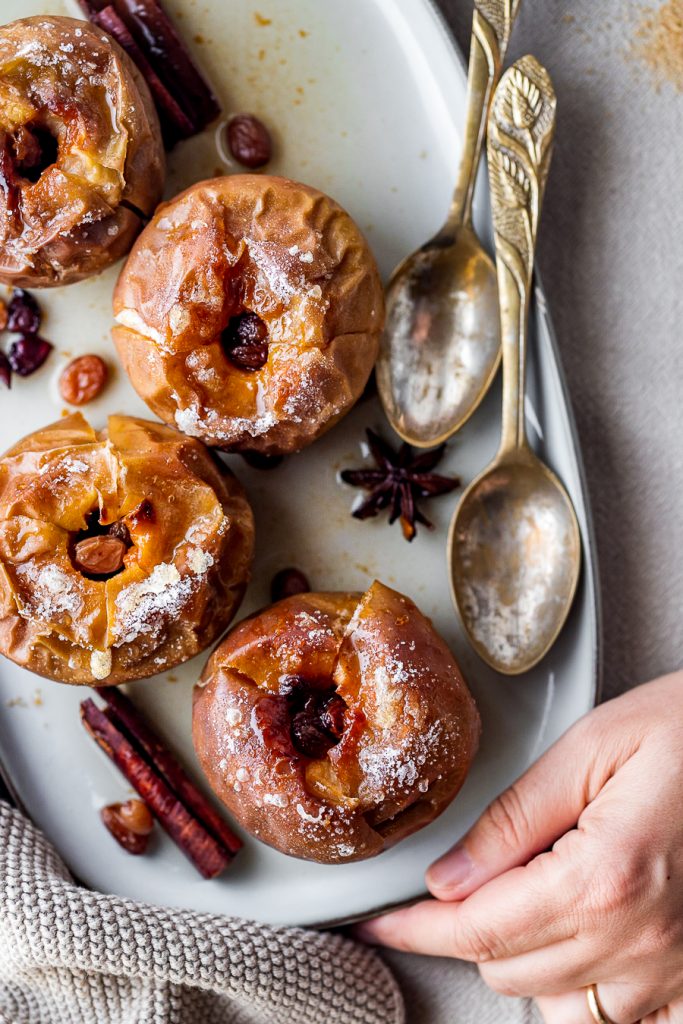 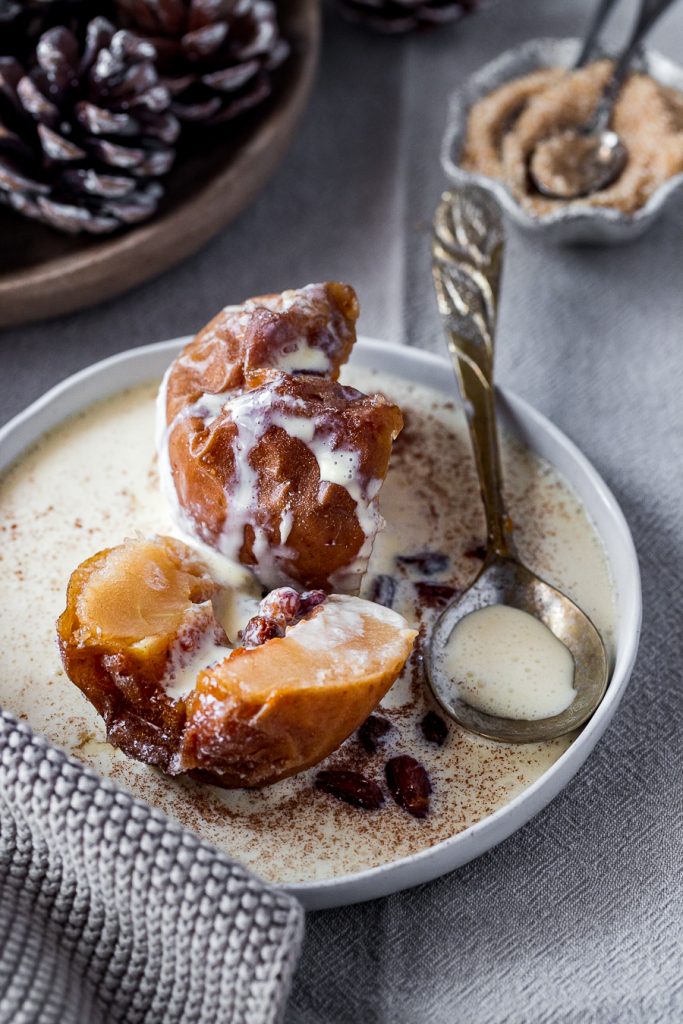 How to eat the baked apples?

My favourite way is from a small cup, with a spoon, drenched with their syrup, to close a meal. I usually have the need to end dinner with something sweet and warm, and baked apples are just perfect for me.

But, since I always make them in abundance, it happens that I also eat them for breakfast, with yogurt and granola, or as a snack, with a spoon of nut butter.
I also find fruit-based desserts incredibly appealing, a crowd pleaser, so I often make the baked apples as a dessert when I have (or now I should say when I had) friends over for dinner. Serve them as they are, drenched with their syrup, or up the game adding a scoop of ice cream. The ultimate pleasure, then, is to sit them in a puddle of vanilla dotted custard. 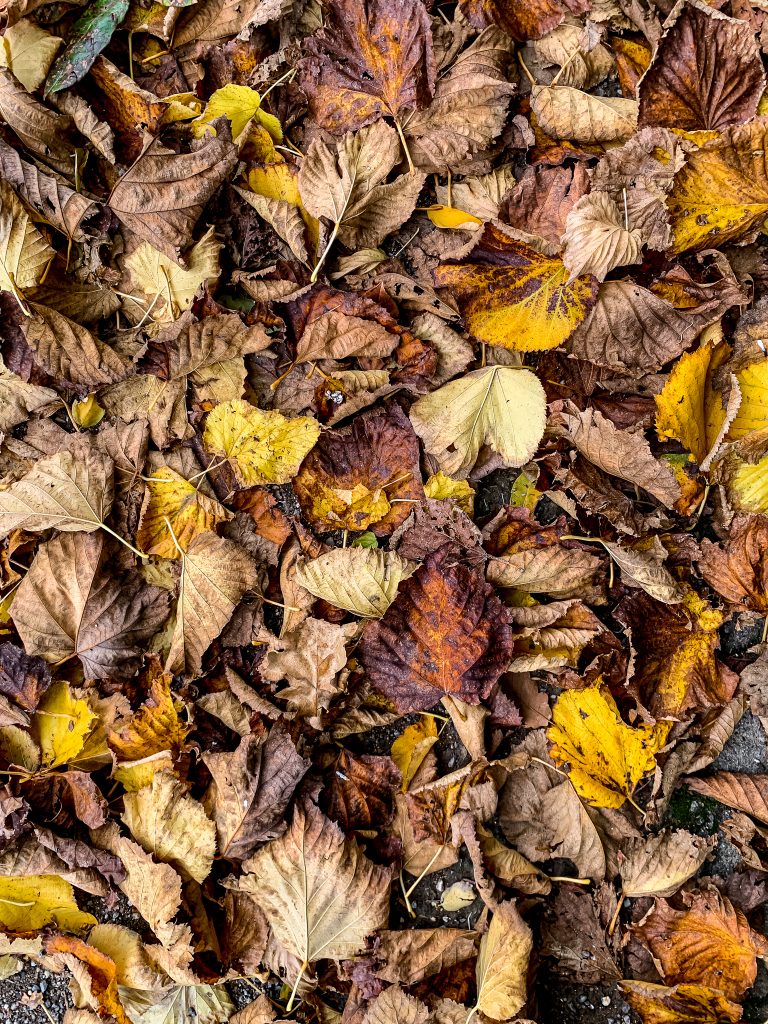 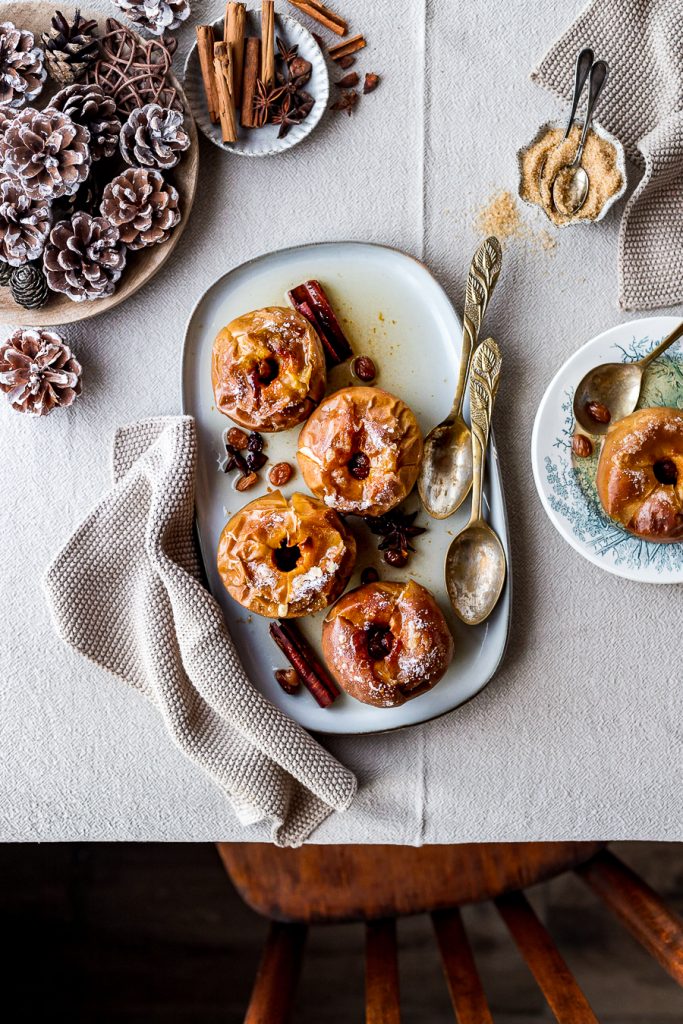 Everything began with a trip to the Alps, and an apple strudel

Apple pie, a juicy filling and a buttery crust
applescinnamonraisins