I love Laurie Colwin’s down to earth, witty and friendly style, this is a matter of fact. I already told you about her in an old post about a potato, porcini and chestnut soup. What I didn’t tell you is that I owe my renewed love for peppers to a few pages she wrote in 1988 in her Home Cooking book.

She loved red peppers so much that once she was able to eat a large bag of them as she walked home from the store. She adored red peppers fried in olive oil more than almost anything else. She described shapes, colours and recipes and she swore by the marriage of peppers and anchovies, as they were made for each other.

But it is her description of roasted peppers that won my heart.

Roast the pepper over the gas burner on a skewer or long fork. The skin of the pepper will char and turn black. This is always quite fascinating to watch. Turn the pepper until it is burnt all over and then rinse off the charred skin under cold water. This roasting cooks the pepper and gives it a silky texture. At the same time it brings out its smoky taste. Laurie Colwin, Home Cooking (1988) According to Jane Griggson and her Vegetable book, India, Hungary, Italy and Spain had to await Columbus to develop what are now their most typical dishes. Peppers are indeed a close second to tomatoes in their association to Mediterranean food. It might be the colour, which reminds of sun flooded summers, or it might be the slightly sweet flavour which pairs beautifully with anchovies, oregano and capers.

Anna Del Conte, in her Gastronomy of Italy, tells us that today peppers are popular all over Italy and appreciated by leading chefs, who usually match peppers and pasta. How not to agree with this combination. Peppers are the star of many Italian signature dishes such as peperonata, roasted pepper crostini or rice stuffed peppers.

In the past, though, recipes with peppers were not common in cookery books as they were considered to be strictly peasant food. Ada Boni in the 1920 is probably the first one to offer a wide range of recipes with peppers in her Il Talismano della Felicità. Long live Ada Boni and her recipe for stuffed tomatoes! I like to play it simple. I love to roast peppers just like Laurie Colwin described. I season them with a glug of olive oil, garlic, dried oregano, salt and pepper. Roasted peppers are a typical appetizer from Piedmont, even though I just love to keep them at hand, covered with olive oil in a bowl in the fridge. 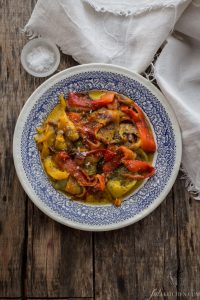 In my frenzy to add roasted peppers to every possible food, I prepared a cheese toastie with sourdough bread, milky mozzarella and a few strips of roasted tomatoes. I can not think at a better way to say goodbye to summer.

Eat the cheese toastie steaming hot, directly from the pan, and share only if necessary!

The Italian name for peppers, bell peppers or capsicum, is peperoni. Isn’t it so similar to the word pepperoni? So remember that when you order pizza con I peperoni in Italy you will get a pizza topped with roasted peppers, not with what you usually associate to the word pepperoni, a spicy Italian sausage. Search on the menu for a pizza con salamino piccante if you want the spicy salami! Pesto and ricotta lasagna. All the food I’m freezing for later