Summer was long and carefree. The days would stretch endlessly along with the evening shadows. The intense aroma of basil would permeate the sultry air.

These were the summers of the past, when the school holidays would last for three months, when September would mean back to school. Everything revolved around natural and refreshing ingredients: watermelon, ice cream, tomatoes, cucumbers, mozzarella, prosciutto and melon. Dinners were out in the garden, when the loud chirping of cicadas would give way to the sound of crickets. Mum would make often panzanella or caprese. 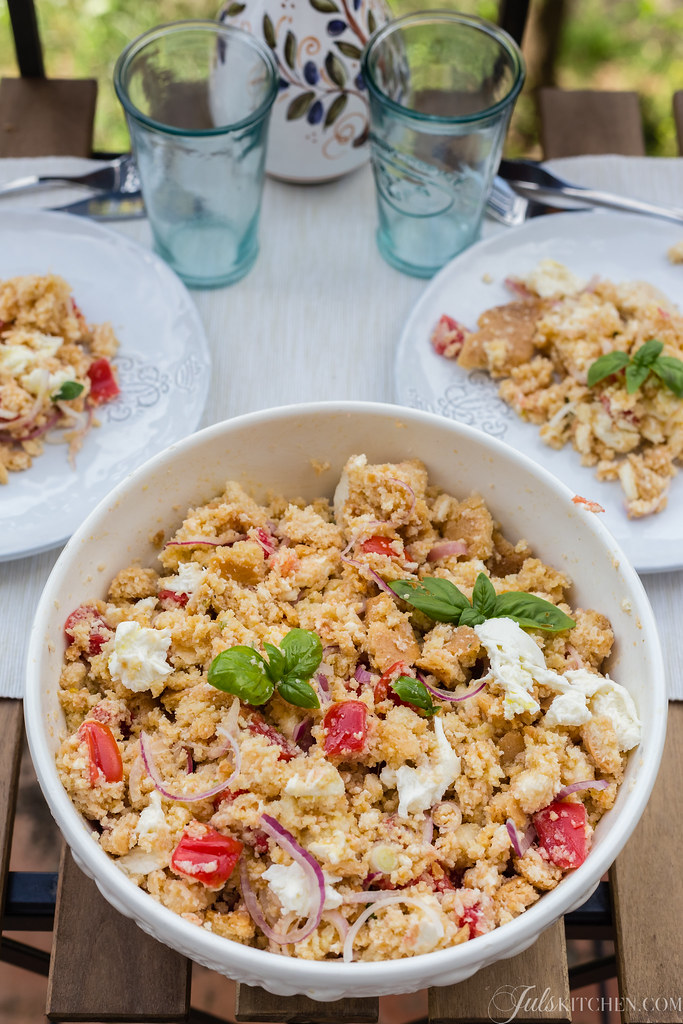 The first one is a Tuscan dish of peasant origin, the celebration of stale bread and the best seasonal produce. If you ask anyone here in Tuscany how they make their panzanella, you will have endless versions. Each head a tribunal. They are as many as the tables where we meet for dinner. The basic ingredients are essentially three: stale bread, ripe tomatoes and basil. In addition to these three ingredients plays its role the family tradition, on which everyone is ready to swear, and the pantry availability.

In my personal version the cucumber, sliced thinly, is not to be missed, as the onion, preferably from Certaldo: it has to be mandatory soaked in cold water to lose its pungent character. Tommaso would preferably omit the onion in favour of salted capers and tuna, Claudia instead would prefer not to have cucumbers in her dish, but she has nothing to say about the onion.

Panzanella is a blank canvas on which you can draw with the colours and fragrances which you like the better, versatile as it is the Tuscan bread, plain and inimitable. 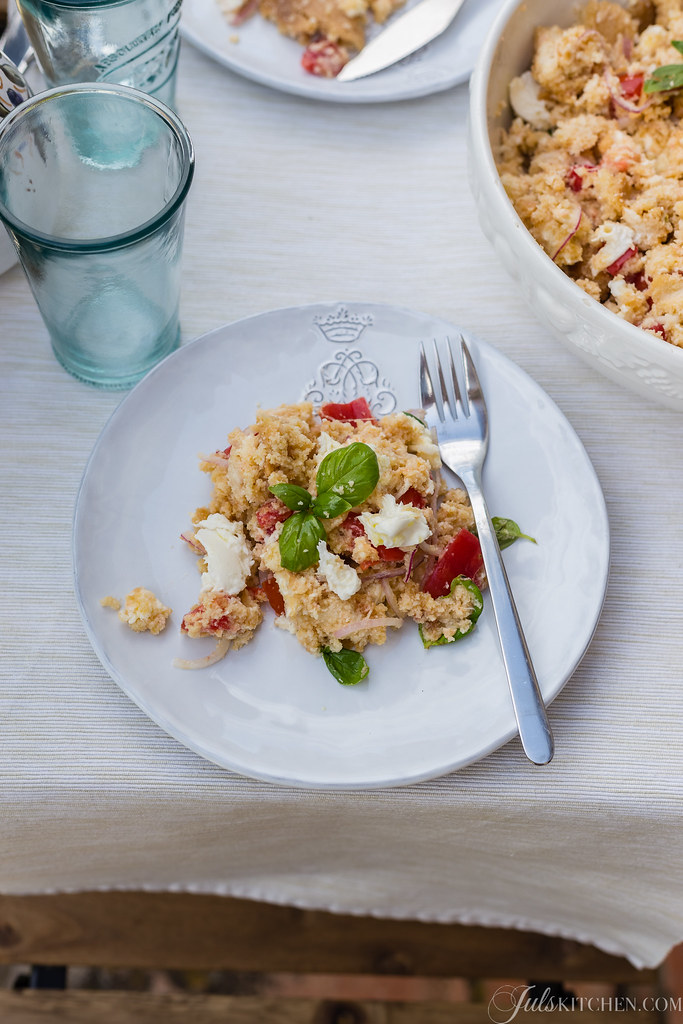 Caprese is perhaps the dish which mum has prepared more often in the summer since I was a child, sometimes with ox heart tomatoes, large and fleshy, sometimes with San Marzano, which I prefer when they are still slightly unripe. We have slowly brought caprese to a higher level: the oregano comes every year from the South, it is intense and balsamic, dried by the Southern sun.

The awareness of the importance of the mozzarella uplifted our caprese. We used to move it directly from the fridge to the plate, cut into thick regular slices as the tomatoes. Now we know how to turn the mozzarella into the protagonist of our dinner and make it shine on the plate. The mozzarella must be removed well on time from the refrigerator, at least one hour before, so that it can return slowly to room temperature. Rather than slicing it, I prefer to tear the ball of mozzarella with my hands into small morsels to add to the tomatoes: the extra virgin olive oil, salt and oregano soak the mozzarella bites in a marriage of love.

Today’s recipe comes from the marriage of panzanella and caprese. 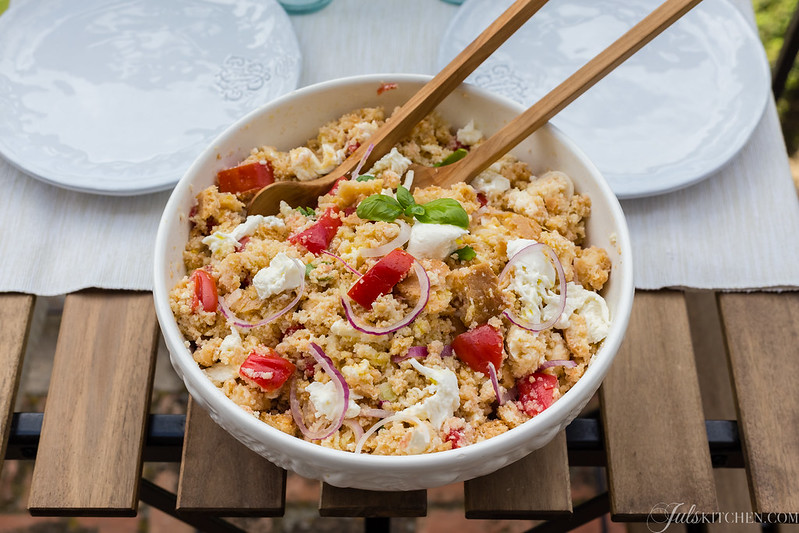 Tuscan panzanella with tomatoes and mozzarella

The core of the recipe is the Tuscan panzanella, made by the book, with stale bread soaked in water, tomatoes costoluti from Florence, Certaldo onions – sweet and juicy – fresh basil leaves, your best extra virgin olive oil, white wine vinegar and salt. Ripe tomatoes call for mozzarella fiordilatte as in the classic combination of a caprese.

It is a quick and light recipe that you can make for a dinner with friends or with your family now that summer comes, but it is also an excellent alternative to spoon into a tupperware for an office lunch. The milky taste of the room temperature mozzarella emerges, exalted by the good olive oil and the vinegar. If you add morsels of mozzarella to your Tuscan panzanella you will have a light main dish made with simple ingredients which are always available to everyone.

To show you how simple and irresistible it is, we have also made a video recipe for you! 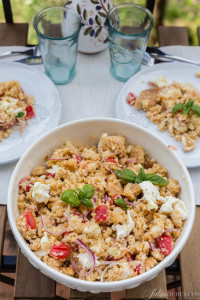 Tuscan panzanella with tomatoes and mozzarella 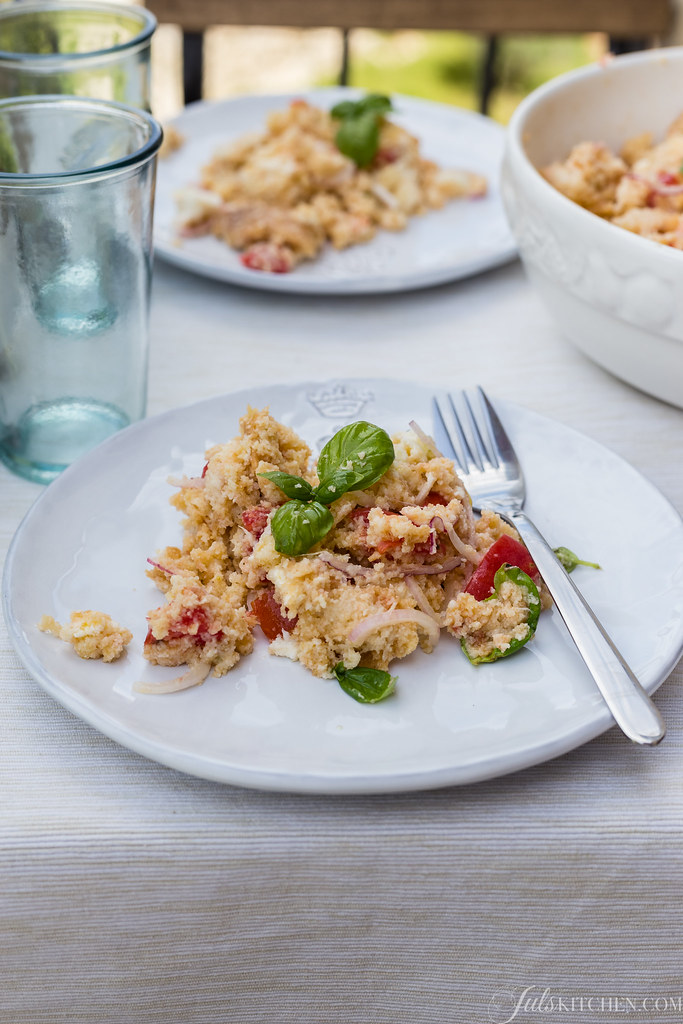 Tomato purée, or, as we call it, The Preserve
basilbreadmozzarellaolive oiloniontomatoes