Garlic is the peasant’s spice cupboard. Spices were essential to sophisticated cuisine from the middle ages until at least the seventeenth century. But the rural masses couldn’t afford them. Garlic, leek and onion, by contrast, stank of poverty. Which is not to imply the well-to-do refused to eat these pungent vegetables – just that they looked down on anyone who had no alternative when it came to giving food flavour. John Dickie – Delizia!

This is John Dickie talking about the evolution of Italian cuisine throughout the centuries, of the enormous importance of towns and cities in the development of an Italian food culture and of the sharp distinction in between peasant food and the food of wealthy people. Garlic, leeks and onions are still suffering from this social stigma, though it is hard to imagine Italian cooking without a few cloves of garlic almost automatically added at the beginning of almost every savoury recipe. The official recipe for bagna cauda, the Piedmontese garlic and anchovy dip usually enjoyed with raw vegetables in autumn, calls for one head of garlic per person. One. Head. Of. Garlic. Yes.

Pici would miss the simplest though incredibly flavourful aglione sauce, made with a thick tomato purée, a generous amount of olive oil and an equally lavish amount of garlic. It would not be summer without grilled eggplants seasoned with chopped garlic and fresh herbs. Or think about meatballs. Meatballs without garlic lack depth of flavour. Spaghetti aglio, olio e peperoncino would miss one of the three basic ingredients, garlic, which infuses the olive oil with its unmistakable aroma.

Even though garlic is essential for many traditional recipes, Italian cooking is not as garlicky as foreigners think, as I often need to repeat during cooking classes. Being born in a family where garlic was always considered indigestible, I have been taught to brown it whole in olive and to discard it before the dish was served. Murphy’s law could be applied even to garlic as, if I forget to remove it, you could be sure it would invariably hide in my father’s plate. There’s nothing my father hates more than garlic.

Sometimes we even leave the garlic in camicia, with its shirt on, which makes the garlic hint even more gentle in a dish. Other times, as grandma taught me, we remove the anima, its soul, the tiny pale green shoot, to make it more digestible and less pungent. Both Anna Del Conte and Jane Grigson underline how throughout history onions have been an indispensable ingredient in every country’s cooking.

Since then, no civilization or should I say no developed cuisine, has been able to do without onion. Jane Grigson – Vegetable book

The Roman Apicius uses onions in many recipes in his De re coquinaria, mixed with herbs, sultanas and honey. Onion is one of the odori that they would gift you at the market, a basic ingredient of a good battuto, which will later become a soffritto.

Onions can be pungent, though my grandfather Remigio used to slice one of them in the morning, soak the thick rounds in icy cold water and eat them with crusty bread for breakfast. Onions can be smelly and they can make you cry, but they also give the sweetest note to soups – imagine the French soup a l’oignon or the Florentine carabaccia – and focacce. I could also eat onion jam by the spoonful. Leeks are my latest fascination in the kitchen. I used to cordially ignore them until I found myself cooking leeks gently on low flame doused in olive oil. The richness of the sauce changed my mind instantly. They are now my go-to ingredient for soups, I substitute them to garlic when I prepare my weekly serving of beans and sausages. They also marry butternut squash beautifully in this pasta sauce.

Even though they were highly used in the past times, they disappeared for centuries from the table of the gentry and Jane Grigson cites, among other historical and cultural explanations, a reason that might still be valid today.

If digestions were as bad as all this suggests, and they probably were when diets were stodgy without fruit or many vegetables, then breath must often have been bad. Anything that could have added to this social fear – leek, onion, above all garlic – was prudently avoided, or subdued by strong-arm water treatment. Jane Grigson – Vegetable book

You need good skills or a good instinct to balance the amount of onions, garlic and leeks in a dish. A good sense of timing is also essential when it comes to be heavy-handed with this smelly triplet.

Rubbing with garlic your toasted slice of bread is not the best idea if you are going out on a first date.

Years ago, when I was still studying at the university, I applied for a waitress job in a restaurant in a nearby town. I was so introduced to the habit of sharing dinner with the kitchen brigade and the other waiters. On the very first day, the chef served a large bowl of pasta all’aglione, a cheap flavourful dish that could keep us going for hours. That had been probably the wrong moment to be generous with garlic as when I came back home that night the first thing that my mum said was: poor clients… So here we are, concocting a risotto whose main ingredients are leeks and the mellowest fresh Tuscan pecorino, the second recipe of a cooperation with the Consortium of Pecorino Toscano began in December. A good risotto can be as comforting and nurturing as a hug. A good risotto made with leeks is the hug of your best friend after a rough day, a caress from your grandma, the most soothing dish that you can make with such poor and simple ingredients.

I tend to use Pecorino instead of Parmigiano in all my risotti, it must be something in my DNA. Most of the time I also use olive oil instead of butter, but today I decided to respect the well-working combination of leeks and butter to create a creamy winter risotto. 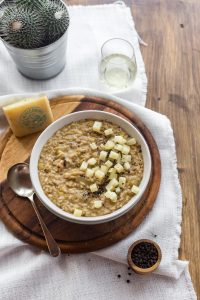 Link Love – What I am reading and cooking these days

What have you been reading or cooking recently? Share links in the comments! Also, which is your relationship with garlic, onions and leeks? A brown rice salad with an Autumn flair

Pumpkin risotto. Valentine’s Day and a novice in the kitchen
butterleekrice