My job is tightly connected to my favourite activity, cooking, therefore I find it difficult to pinpoint what I like to do when I’m not working. What do I do when I do not cook for the blog, for a magazine or in a class? Apart from reading, something I leave to the evening when the lights are dim and the rhythms slow down, I think you won’t be surprised if I tell you that I cook, again.

There are two activities that I especially enjoy: one is baking bread, both with fresh brewer’s yeast, added sparingly to the dough, and with sourdough, which I’ve been feeding for almost five years now, with some highs and many more lows.

The other one is preserving: I find it genetically satisfying to make jams and marmalades to preserve the best produce of the season for as long as possible. Don’t get me started with the liqueurs: limoncello, bergamot liqueur, lemon verbena, nocino, alchermes… I might sip them twice a year, but that’s not the point for me. I am so proud when I line them up on the table after a dinner with friends or a cooking class, it is home made at its best.

Over the last few years, since the production of panforte and cavallucci for Christmas took on pastry shop rhythms, I started to make my homemade candied orange peels and candied citron peels. Apart from the exorbitant cost of high quality artisanal candied peels, which is totally justified, given the amount of time it takes to make them, the taste of home-made candied peels has nothing to do with that of store bought, colouring bright, preservative rich ones. Making your own candied peels cuts down the costs and provides you with the most fragrant peels you’ll ever taste. 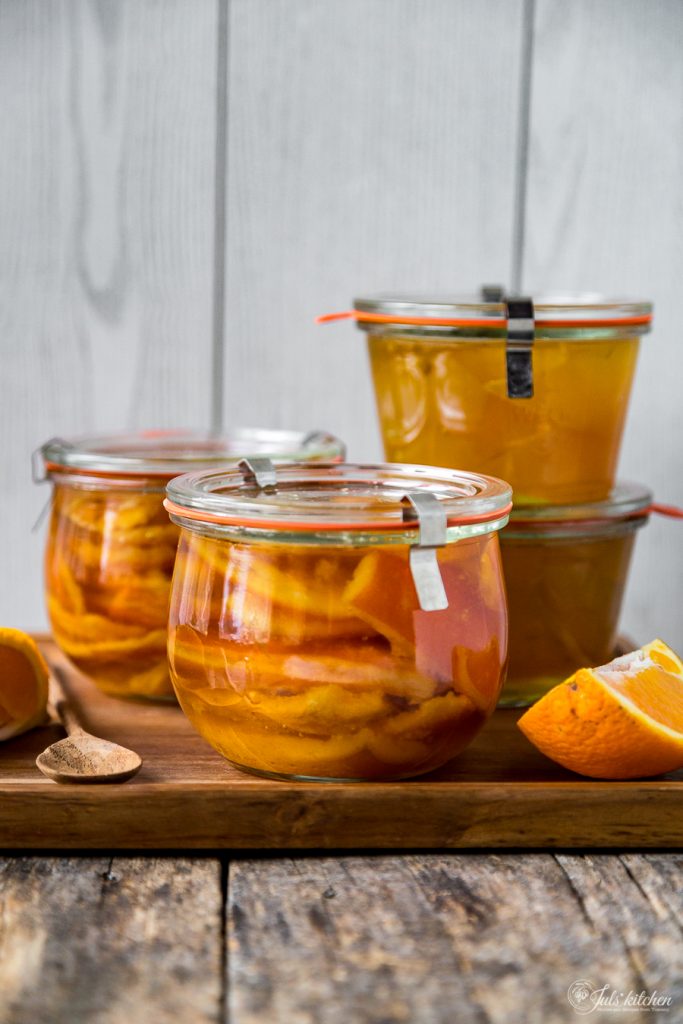 One of the reasons why winter is my favourite season are citrus fruits.

As soon as I see citrus fruits on the market stalls, I compulsively buy them and bring them home by the bagful. The production of bergamot marmalade or bitter orange marmalade is the peak of the citrus season for me.

I eat tons of oranges, too, so I had to come up with an idea to use them. When someone eats an orange, they look at me with a terrified look: how do you want the peel? the whole skin, pith included? just a thin zest? Is that okay?

The thick skin, with all the pith, in large and regular segments, is good for making candied peels. If you carefully remove just the orange zest with a peeler, that’s perfect to make orange powder. 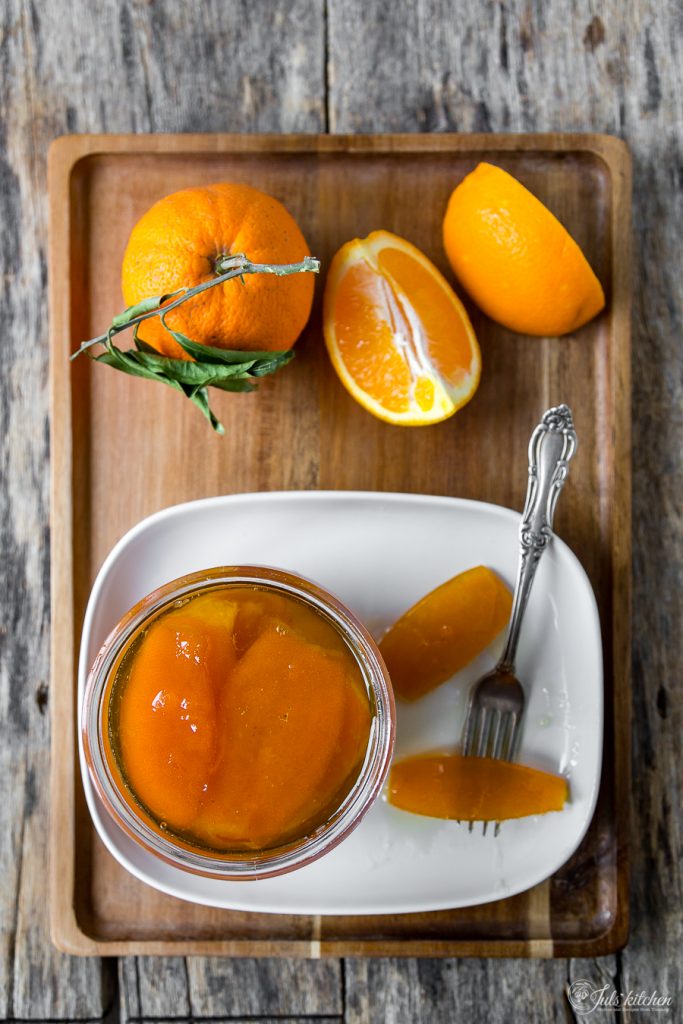 Candied orange peels, how to make them at home

When my parents asked me what I wanted for Christmas I gave them a list for marmalade lovers: a jam funnel, jam jar tongs and a refractometer. This geeky tool, which looks like a kaleidoscope, is used to measure Brix degrees, which indicate the density of sugars in a liquid. It comes in handy for marmalades and candied peels in this moment of the year, while I’m going to use it to have the right amount of sugar in syrups to make sorbets in summer.

Obviously the refractometer is not essential for candying the peel, though it helps. Below you can find the detailed procedure to candy your orange peels at home. Then you’ll be able to use in panforte, in cavallucci, and also in a simple citrus pound cake, or you can cut them in strips and cover with melted chocolate…

Consider having a pot with peels and syrup on the stove for about ten days: the positive side is that your kitchen will smell incredibly fresh and citrussy for days. 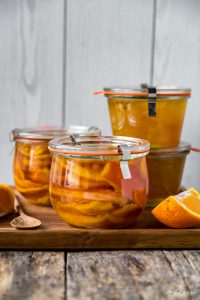 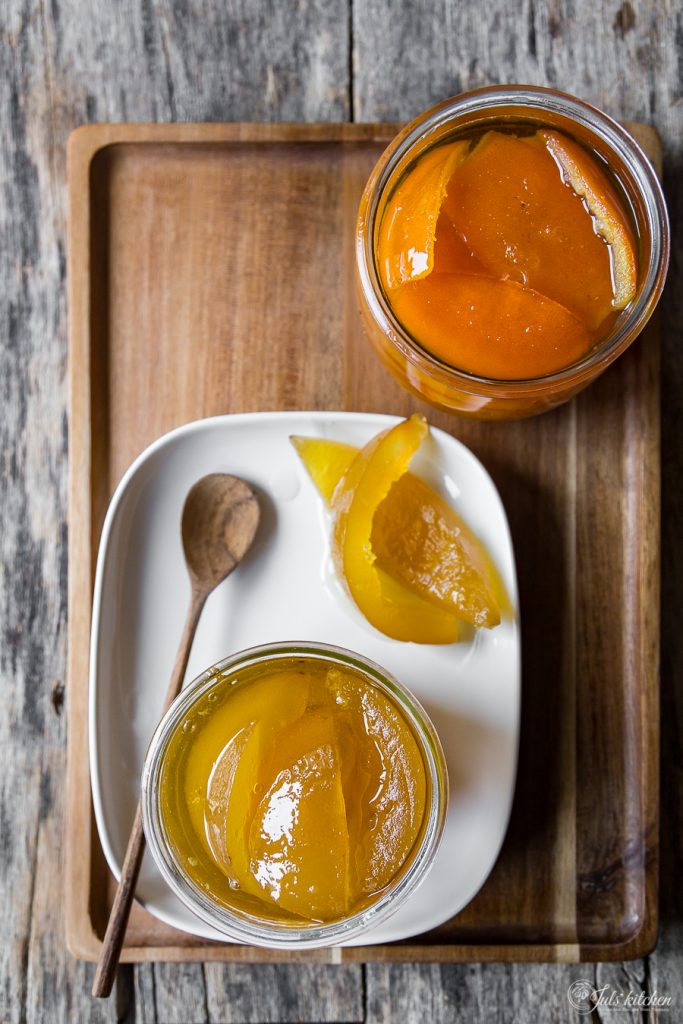 I read many articles, asked tons of questions and eventually came to my home-made method, which is not scientifically rigorous. These are the sources that helped me find a way, along with a trial and error process which was so fun all the way down to my candied orange peels. 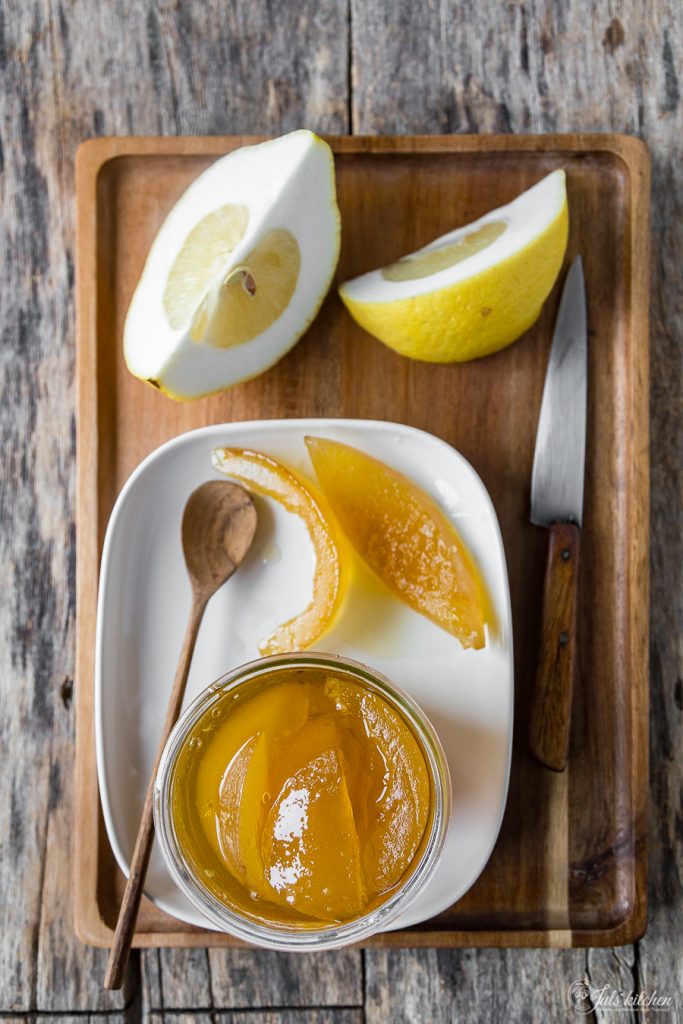 Candied citron peels, how to make them at home

The exact same procedure can be applied to citron peels. In this case, cut the citron in a half, and then in quarters. With a sharp knife cut away the pulp and keep the white pith, which will be thick and firm. Depending on the thickness of the peel, it may take a day or two more than orange to candy.

Do not throw away the pulp. You can add it to a marmalade (and we’ll talk about it next week) and also slice it thinly into a salad. The citron, if possible, is even more charming than the orange once it has been candied. 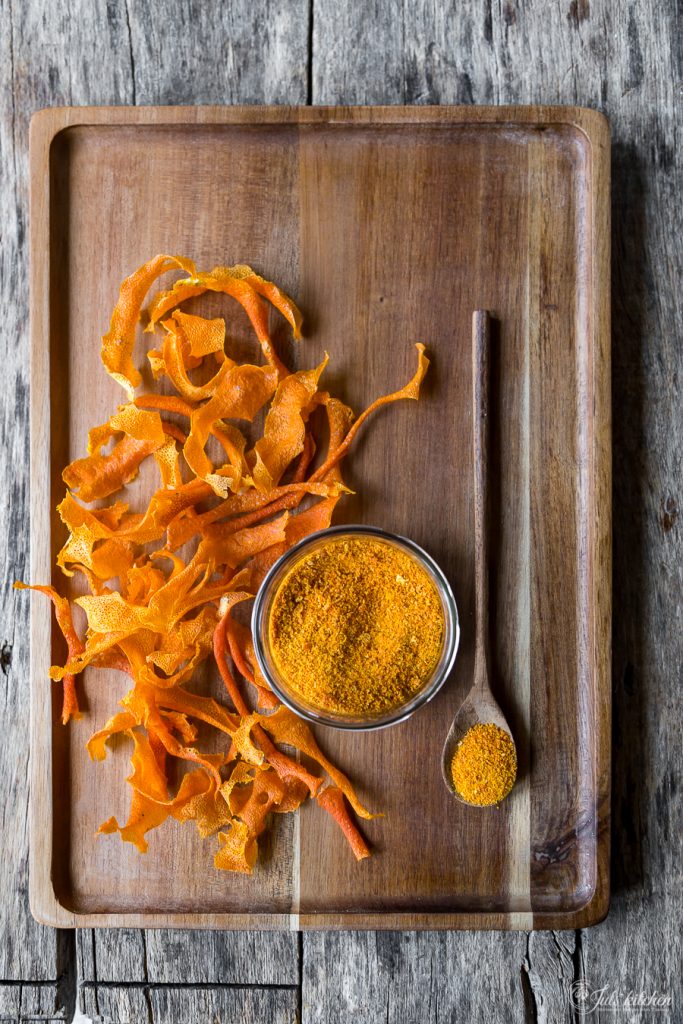 Every year I fill a jar with this fine powder with an intensely orange scent and use it sparingly since the end of the orange season in biscotti, cakes, but also in risotti and with fish to substitute the freshly grated orange zest, one of the most celestial smells in the world.

I recently discovered that what I believed to be a new way to preserve the orange aroma throughout the hot months was instead an old remedy, something my grandmother has always done. They would dry up the orange peel next to the fireplace and crumble it in cakes and biscotti when needed. Those women had never thrown something away, let alone the peel of a fruit as precious as an orange.

So how do you make it nowadays? Remove the orange zest with a peeler. Collect it on a wire rack and dry until brittle next to a stove, on a radiator or near the fireplace. You can also dry them up in a dehydrator and in the oven on low temperatures. Be careful as the orange zest is so thin that it burns up easily. When you have a good amount, blend them into fine powder. Collect this powder with a brush in a jar. It can be kept for several months, preserving its aroma intact.

You can follow the same procedure for clementines and lemons. 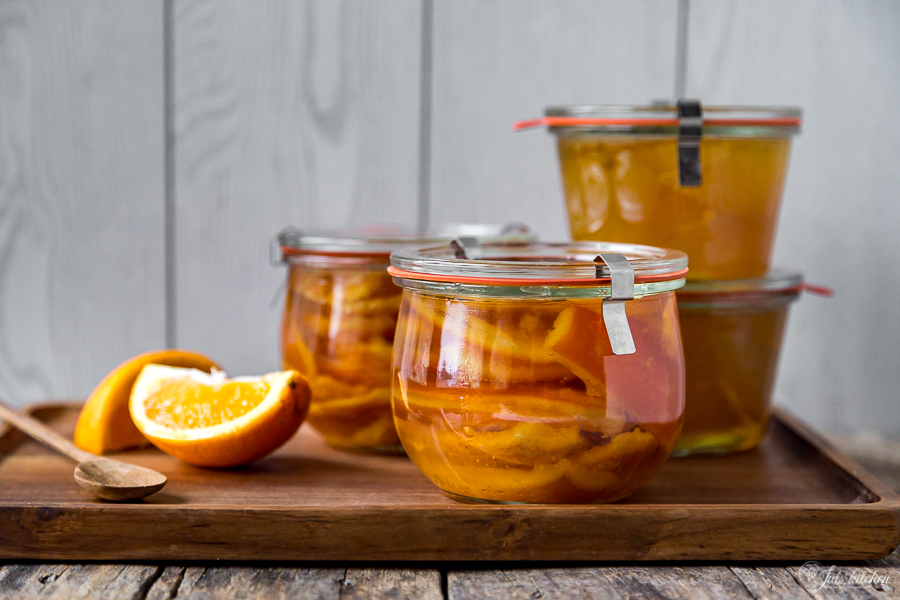 Bitter orange marmalade, and nothing else