If it is true that the way to a man’s heart is through his stomach, it is also true that we must be careful to take the right path, avoiding the troubled track full of bends, up and downs and breathtaking cliffs. Everyone loves an adventurous journey, though getting car sick is not always necessary.

I’ve always been known as a girl with a deep love for the ‘and‘. A delicate crostata filled with custard with cinnamon and bitter almond aroma, a steaming cup of black tea with lemon zest and vanilla, a fragrant pie with sun-dried tomatoes and black olives. Sometimes you need to play with flavour matches, it is the dish which calls for it, but often I end up adding unnecessary complications, which weaken rather than enhance the appreciation of a recipe. 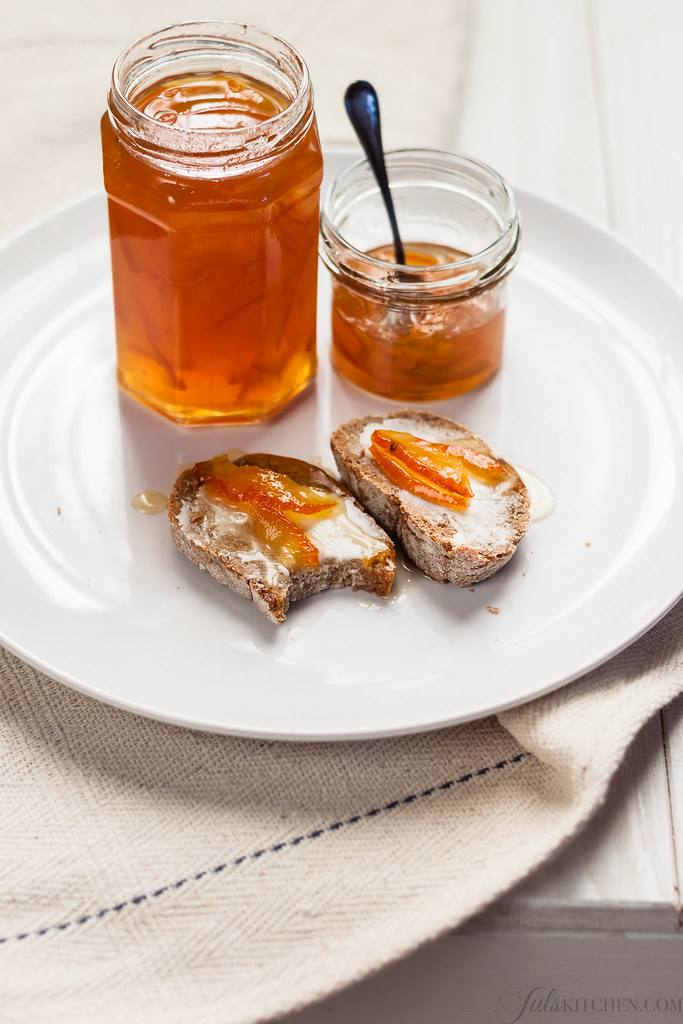 The most striking example are preserves. The label on my jars is often too small to contain all the ingredients that I used: pumpkin jam with vanilla and almonds, apricot and cardamom jam , peach and rhubarb jam (one of my most colossal flops, after a short cooking it turned out of a dull green color…). And I was so proud of it!

Imagine the scene: a quiet kitchen on a Sunday morning, autumn light, sleepy eyes and huge smile when I present my jam, ‘this is homemade with my very hands, can you see it? the fruit bought at the market, raw cane sugar, an handwritten label‘… then I began to list all the ingredients and I almost lost his attention. He asked: what about a simple jam, as they used to make years ago? There were blackberry, peach, apricot jams… 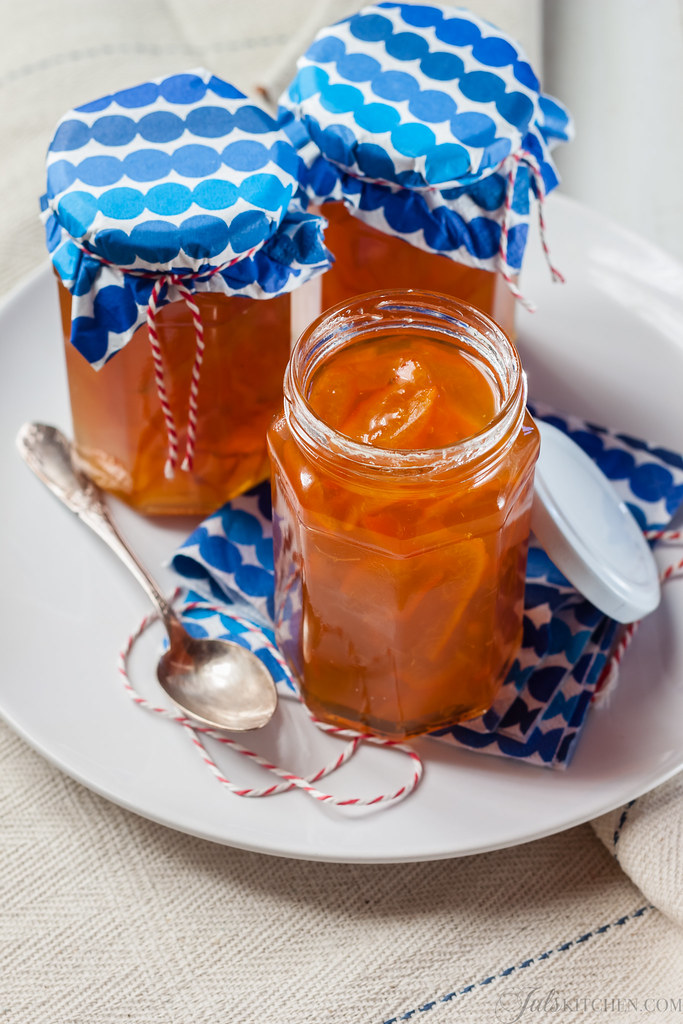 True, they had a unique and evocative name, immediate in bringing back to mind the penetrating scent of peaches that gets into your nostrils while you peel them off in the shade, in a sleepy afternoon of a late Tuscan August, chasing the buzzing wasps away and lustfully eating syrupy slices of peach.

So I searched for the marmalade I made last year at the end of the bitter oranges season, a few jars hidden in the bottom of the pantry because they had nothing special to me, no extra ingredients added to make them unique. To be honest I had also forgotten the jam on the stove and it was a little bit overcooked, a thick caramel coloured gelatine. I showed him the jar dubiously and something magic happened! The marmalade was halved in no time, spread generously on slices of toasted bread. He finally asked: What kind of  jam was that? and I said, proudly:  bitter orange marmalade, and nothing else.

Well, this year you have to make again a few jars of  bitter orange marmalade and nothing else. 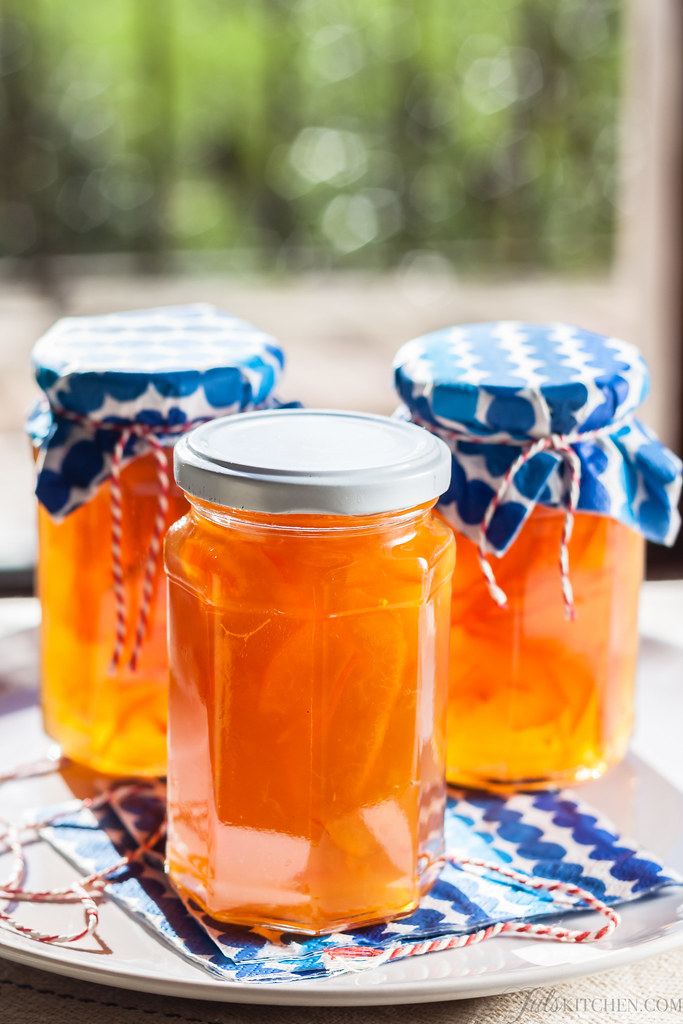 So here we are, the season is ripe for the bitter oranges, and I found a good recipe to follow with just a few changes, the Seville orange marmalade from Preserves: River Cottage Handbook No.2

Print this recipe
5 from 5 votes

How to use it

This bitter orange marmalade calls for a dark bread, spelt or rye , and a sliver of butter. It becomes a feel-good breakfast, a jar of sun that can turn a gray winter morning into a special day. You an almost feel the warmth of the sun on your skin.

Maybe it is the colour, maybe the slightly bitter taste, but I can see it also as a topping for a cheesecake. Let it drip lazily along the edges, one of those toppings that are so instinctive that you want to stick your finger in it to collect the drippings.

Its cheerful colour reminds me by contrast to the milky white of a pannacotta, pure and perfect. Stain it with a spoonful of marmalade just before serving. It will be a pleasure to meet the candied caramel zests along with the velvety taste of the panna cotta.

The last match is the simplest one, a cup of plain yogurt and a spoonful of marmalade, slowly mixed to create sunny swirls.

Which is your favourite use of bitter orange marmalade? I made twelve jars and I am currently waiting for 20 kilos of citrus fruit to be delivered at Juls’ Kitchen.

Citrus pound cake. Where everything began.