This date is written in red on the calendar like every other holiday… yet it is not a common one! January the 6th is red, vivid among the first days of the year, the last day of a joyful carousel of many other jolly numbers as red as candy apples… but there’s something more behind its holiday appearance. December the 25th is a full holiday,with a sense in itself. January the 1st, again, is another holiday that makes sense on itself, standing at the beginning of the calendar, waiting for other red numbers to join the party. But what about January the 6th? What about La Befana (as we call this day)? The 6th is meant to be the last in line, the one that turns off the lights and closes the door.

And then, the silence.

Sadness? Absolutely not! A joyful holiday season is finished, this year more homely and warm than usual, but we’re ready to live another season just as good! Have you noticed that the days are getting longer bit by bit? The light is regaining its kingdom, the air smells of novelty, such as my diary with only a few appointments marked, New Year’s resolutions begin to come true… or maybe not… The important thing is that today starts a cycle that will lead us to talk about strawberries, ice cream and picnic blankets in the blink of an eye! 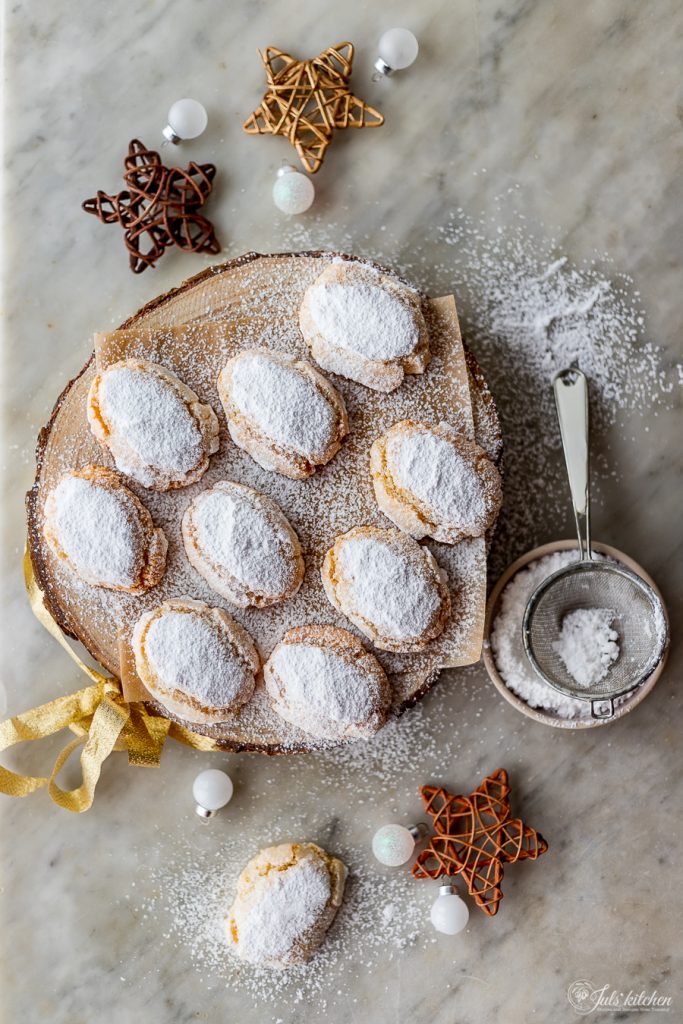 As spring is still far away for the moment, before closing the door to the festivities and turning out the lights, let me make the last swan song of the Christmas period. If you eat one of these, you can not keep yourself from grasping a second one, and so on. Let me introduce you ricciarelli, almond sweets typical of Siena, covered with icing sugar, with a soft heart that melts in your mouth, fresh and moist, characterized by the piercing smell of bitter almonds.

The origin of ricciarelli di Siena dates back to the fifteenth century: the almond paste – in the form of marzipan or Marzapanetti – was once very popular in the town and Siena was famous even outside its territory for its production. The cookies made with almond paste were reserved for the sumptuous banquet of the Lords because they were made of precious ingredients, mainly almonds and sugar. They were so valuable and refined that marzipan sweets were sold in the apothecaries shops  along with drugs and the most exotic spices of the time.

The ricciarelli from Siena

This recipe comes from the grocery shop Rosi in Poggibonsi (SI), slightly revised. Last year I followed their doses to make cavallucci – very good – this year I tried ricciarelli – the real ricciarelli di Siena – and next year I already know that I will venture myself to the panforte (gingerbread). I love to enter their shop during the holidays because it is full of smells of spices, happy-eyed children and chocolate… but, most importantly, it is full of people talking in code: can you give me the ricciarelli dose for three? stuff for cavallucci without candied fruit, double nuts. Gimme my usual and gimme the spices, too. It’s a turnaround of numbers, doses, tips offered in a lowered voice, small pieces of written paper and puffs of icing sugar, and the result is this! Ricciarelli di Siena.

For a better result of the recipe, consider using a scale.
Tried this recipe?We love to see your creations! Snap a pic and tag @julskitchen and hashtag it #myseasonaltable!

And if I can’t find almond flour? Don’t worry, you can make it at home! Buy the almonds, shell them and remove the outer brown skin (to remove it quickly immerse them for about ten seconds in boiling water). Toast the almonds in the oven at 100°C for about 5 minutes and then let them cool down. Blend them with a tablespoon of icing sugar. Pulse the mixer several times using the pulse function or by pushing the “on” button, holding for a second, and releasing. The goal is not over heating the almonds, otherwise they will release the oil. Blend until you get the consistency of a medium – fine and coarse meal.

Don’t miss the video on how to make ricciarelli

We filmed the video in Siena, at the wonderful Manganelli shop, and in our Studio, with Alessandro Semplici, our friend and filmmaker from Siena. You can read more about Manganelli in our Siena Foodie guide.

Do you want to bake more sweet treats from Siena?

So you can’t miss:

Fig and walnut panforte for a Christmas Tuscan gathering
almondseggsorange