The buccellato is the typical sweet bread of Lucca, whose name dates back to the ancient Roman times, when with buccellatum they referred to the soldiers’ bread, later evolved into the medieval meaning of sweet bread.

The first reference to the word buccellato appears in a 1485 document related to the process of a woman who had killed her husband with a poisoned buccellato. Another proof of the importance of buccellato in the history of the city is the levy that the Republic of Lucca imposed in 1578 on its sale, the money obtained from this new tax were later used to rebuild the embankments of the river Serchio. 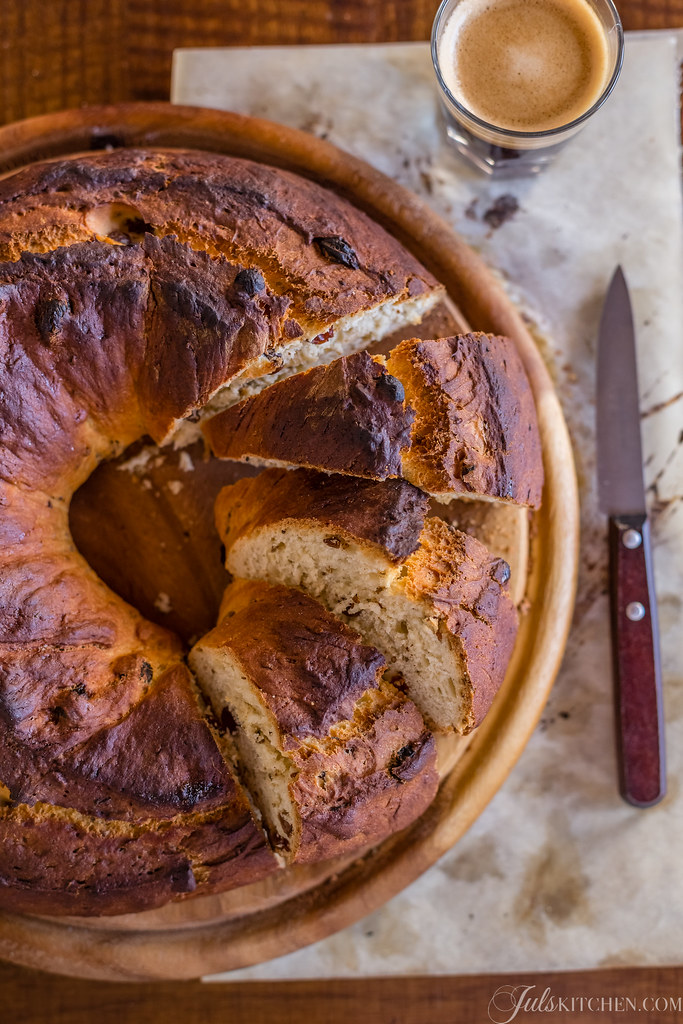 Just by looking at buccellato you can easily include it in the group of typical sweet breads enriched with nuts and sugar of the Tuscan tradition, just as pan co’ santi from Siena, the Florentine pan di ramerino or the bollo, a cake from Livorno with Jewish origins.

You can not say that you’ve been to Lucca if you have not tried at least a slice of buccellato, but mind you, not any buccellato would to the trick. The most famous buccellato is the one you can get in the Taddeucci pastry shop, a refined shop born in 1881. It looks like an old grocery shop, with huge shop windows crammed of desserts, cakes and sweet breads. You can easily find the shop right in the historical centre of Lucca, in Piazza San Michele, close to the homonymous church.

In the past buccellato was a cake that was traditionally made, or bought, for the confirmation of your children. Today it is rightfully included in the everyday life of the city of Lucca. 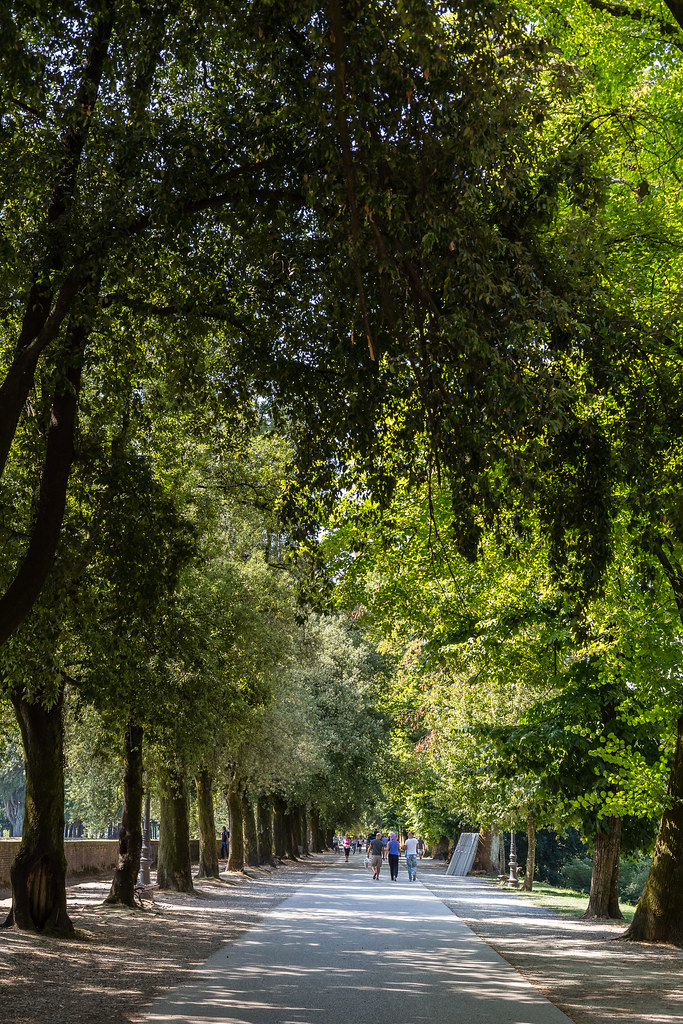 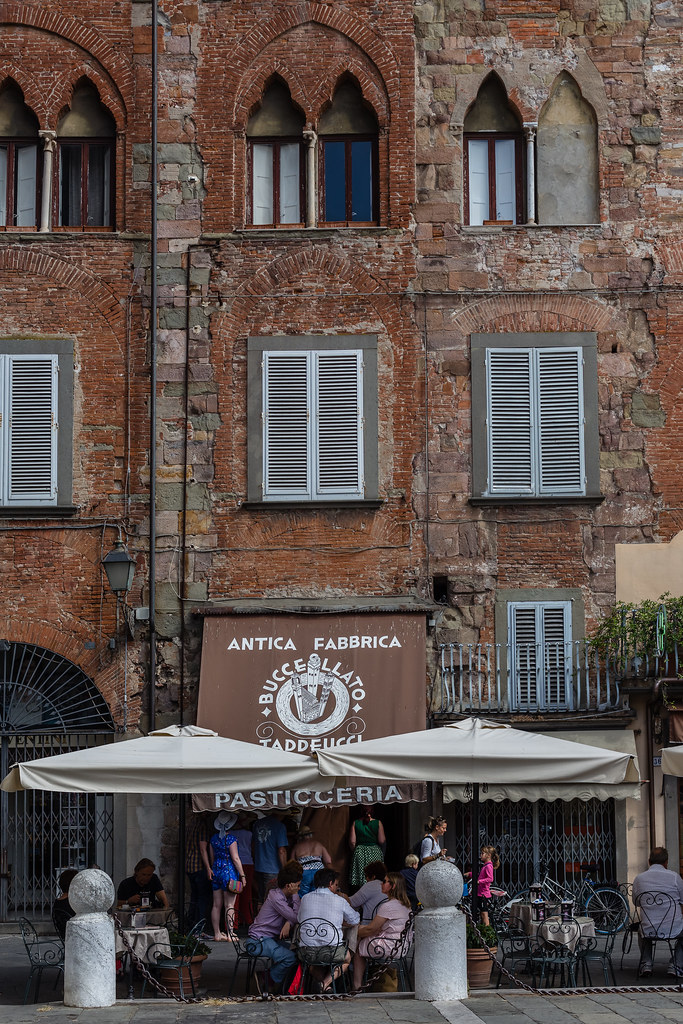 It soon becomes clear that the buccellato is a typical local sweet of consumed daily: just spend ten minutes in the pastry shop and ladies, young couples and old women will parade in front of you, all asking for buccellato or better yet, the same, with an affection in their voice that leaves no room for doubt. Buy it fresh daily, just like bread. It is made just from flour, water, sugar, raisins, aniseed and yeast. The next day, when it is no longer fresh, the heirs of Jacopo Taddeucci suggest toasting it quickly and having it with butter, coffee and milk for breakfast, or using it as a base for other sweet recipes, from a traditional strawberry soup to semifreddo.

When you are there do not forget to try the torta di verdure, a vegetable cake made with Swiss chard, raisins and pine nuts. It is sweet and spiced, unusual, a light and pleasant looking dessert. 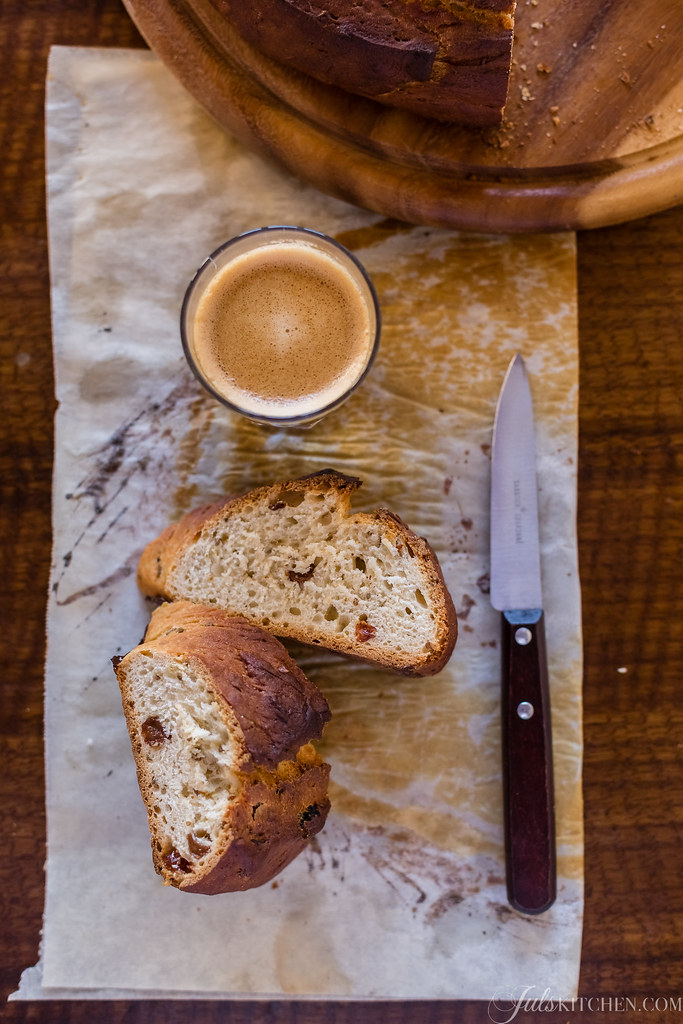 So here we are, the fourth recipe of a Tuscan tour with Ventura discovering local recipes made with nuts and dried fruit. Buccellato is considered a dessert or a breakfast sweet bread, it is made with bread dough, usually enriched with sugar, raisins and aniseed, another widely used ingredient in Tuscan biscuits and sweet loaves. Today’s recipe is inspired once again by good old Paolo Petroni and his Recipes from Tuscany. Traditional Home Cooking: Yesterday’s Flavours for Today’s Taste, and it is more refined compared to the original version, which provided neither eggs nor butter.

While baking an intense aniseed aroma will spread through the house. This reminds me immediately of coffee, as when I was a child my grandmother used to add a drop of aniseed liqueur to her evening coffee. Bake this bread for breakfast with your daily mug of coffee, for an afternoon sneak with a cup of tea or make it well in advance to use when stale in a kind of zuppa inglese, with layers of thick Italian custard and strawberries washed in red wine. 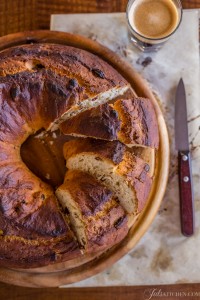 Print this recipe Pin it!
5 from 6 votes

To make the buccellato

To brush the buccellato 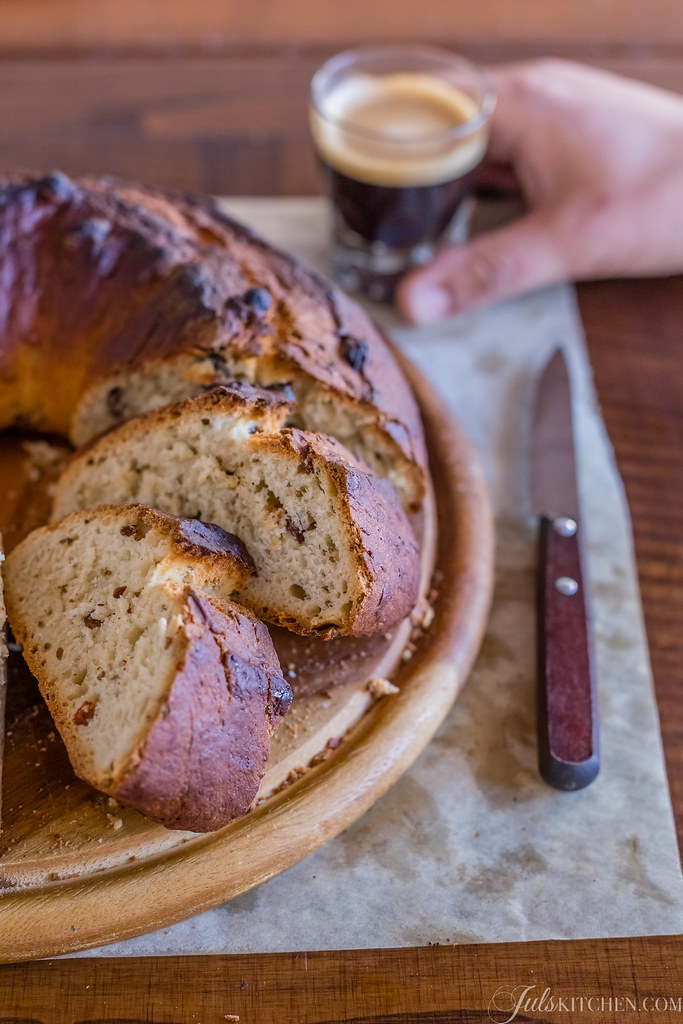 Often in Tuscany we add raisins in cakes, biscuits and sweet breads. We are more reluctant to use it for savory preparations, as it happens in other parts of Italy, influenced by the Arab culture or the Middle East cuisine. In Sicily raisins are used to make a pasta with broccoli and a Christmas caponata, in Naples they are used in a pizza with escarole, while in Veneto raisins are one of the ingredients of a risotto and of spinach patties.

Among my favourite dessert recipes with raisins there are of course the Tuscan castagnaccio, a chestnut cake, and the Florentine pan di ramerino, while among the savoury recipes I am partial to this very old recipe published nearly seven years ago, the sweet and sour stewed peppers, a recipe which was passed on by my grandmother, my aunt and an unknown benefactor of Rionero in Vulture, in Basilicata. 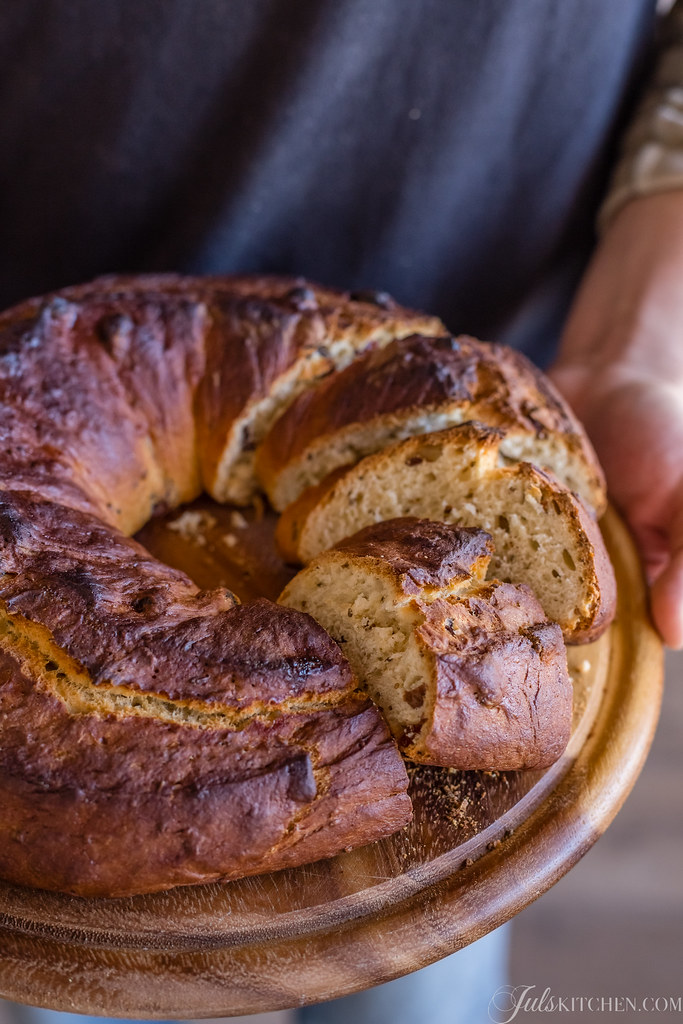