How many stages of life can you live? How many people can you be in a lifetime? the transition from one stage to another is abrupt or  is it a gradual slide, a slight change of boundaries that leads from one bank to another? What has this to do with these *delicious* coconut cupcakes? Apparently nothing. I was here at my desk, my head leaning on my hand, waiting for inspiration to come, when I felt a smell that belonged to another phase, another Giulia. It was chlorine mixed with almond oil…

When I started university, my biggest passion was cinema. I was a faithful subscriber of Best Movie and Ciak, I could quote the complete filmography of more or less known actors, I knew months in advance what we would have seen in theatres the next season, I devoured Cinematerapia and used to spent whole nights in a dark cinema hall with my best friend, digging my fingers into popcorn buckets and commenting continuously each and every cue and quote. 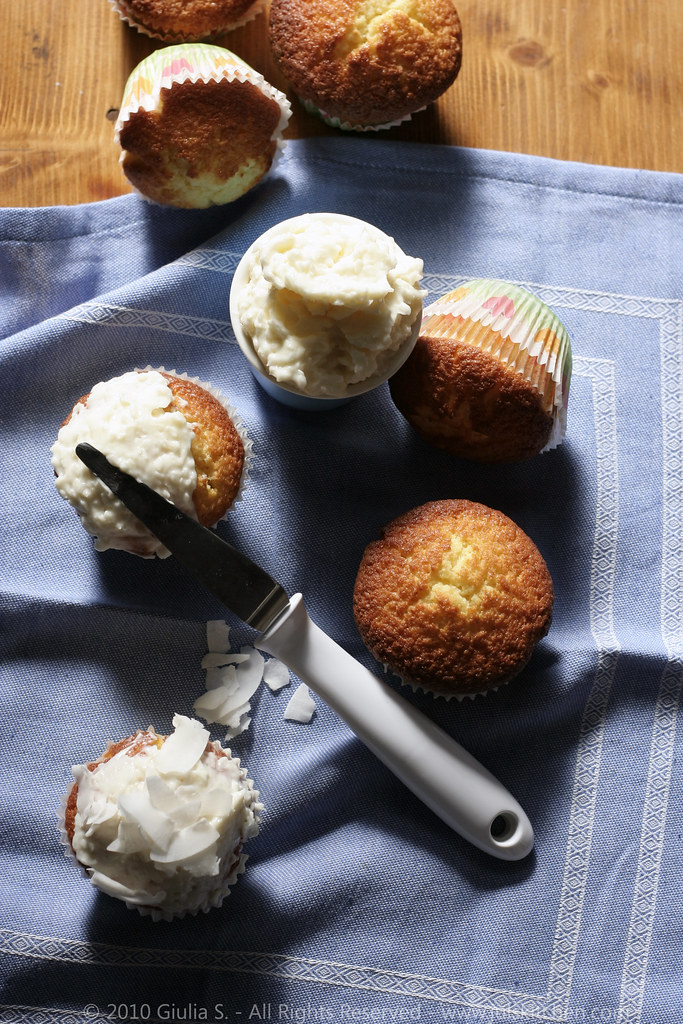 Then one day we found ourselves in Livorno, attending as spectators to a national swimming competition. Chlorine, the air full of noise, humidity, water splashes and tension, honest competition and enthusiasm… swimming entered by force in my life, first as support and enthusiasm for our champions, then as practised sport. On my shelves, Best Movie and Ciak magazines were gradually replaced by Gazzetta dello Sport, posters, autographed photographs and Italian flags. With my best friend, Laura, yes, still with her, we founded a fan club that took us around, making me live some of the most intense emotions of my life, and that gave us some wonderful friendships, which are still alive.

Then life goes on, the job took over the University: it meant new commitments, new rhythms, new people met and new passions. Here you come into my life, and Juls’ Kitchen comes along, together with a passion for food, new friends, new experiences, new satisfactions. Another small revolution, out the Gazzetta dello Sport, and now on the shelves there are cookbooks covered in greased fingerprint and puffs of flour. For more than an year, the blog and the food universe have been a dominant presence, shared, again, with the usual Laura! Endless chitchat about how wonderful Jamie is as a chef, tips on important dinner to organize, quest for the last exotic ingredient.

Then tonight, coming back from the swimming pool after more than a year of absence, I felt the smell of chlorine on my skin mixed with mosturizing almond oil, which brought me back. And it was a triple pike dive, which made me re-evaluate the entire route taken to get here, and kindled the desire to bring everything back, weaving the threads of life and making with them a patchwork dress to wear from now on!

I know, this time I dwelt too much… maybe I lost you at the chlorine smell at the beginning. I beg you pardon, but I wrote all of this in one breath, as a way to remember the many stages of my life, to say that I am proud of all of them, of the way they would pop up every now and then, in a movie quote (my favorite? I carried a watermelon!) or in a po po ro po po poooopo song sang to the French people in a Budapest park, on a rush of joy for the victory of our hero. By the way, a grateful thank you to that person who had the patience to grow up with me, changing and building a friendship that goes beyond the backs and forths of time!

…and now the recipe, you really deserve it now! It belongs – with a few changes especially in the frosting –  from Books for Cooks 8, it was a Coconut layer cake with coconut frosting, later became a twenty coconut cupcakes! 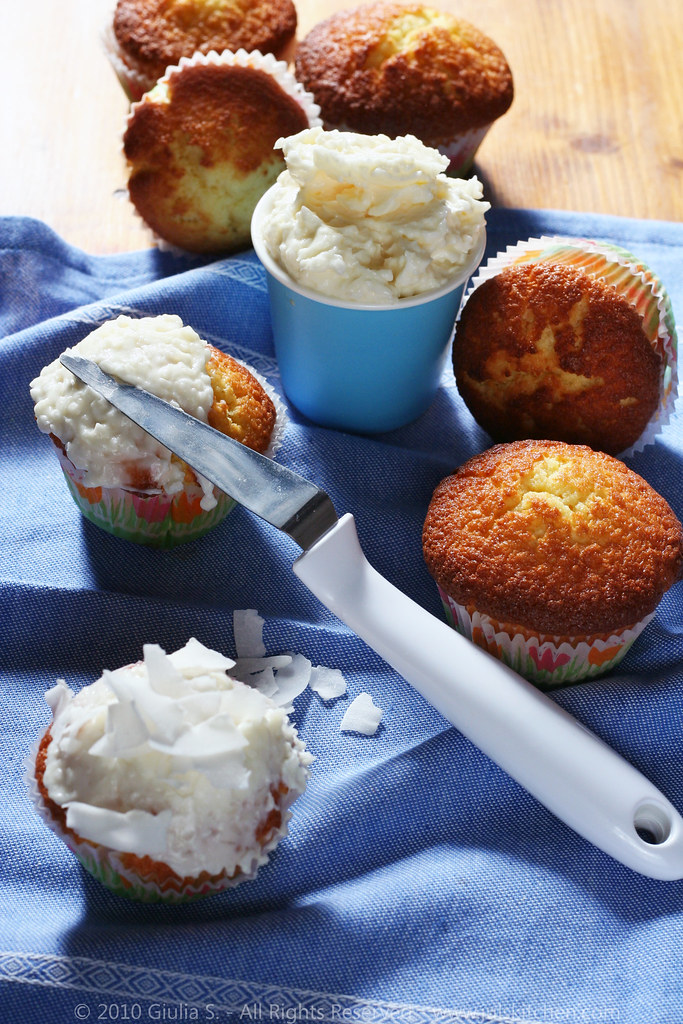 Heat the oven to 180°C. Sift together the flour, baking powder, soda and salt. In a large mixing bowl beat together the butter and sugar until it is light and fluffy. Add the yoghurt and then one egg at a time, stirring constantly and sprinkling a tablespoon of flour after adding the first egg. Keep on adding milk and flour, small quantities at a time, until just combined. Gently fold in the coconut until evenly combined with no trace of flour.

Spoon the batter into muffin tins lined with paper cups, fill to the top with coconut mixture, then bake for about 25-30 minutes, until the tops are golden brown. Remove from oven and leave to cool completely on a wire rack before frosting.

Make the frosting. Beat all the ingredients together, folding in the coconut at the very end.

Smother the tops with the frosting and sprinkle with coconut flakes. Let it rest in the fridge at least an hour before serving.

Tasting test. Coconut clouds, soft and creamy, a beautiful gift for a friend’s birthday party. I adore their snow-white aspect, and I love to frost them in a somewhat rustic and imperfect way, to show their golden tops. A cheesecake frosting gives them an international touch, but they are an excellent afternoon break for children as well, almost light and delicious! 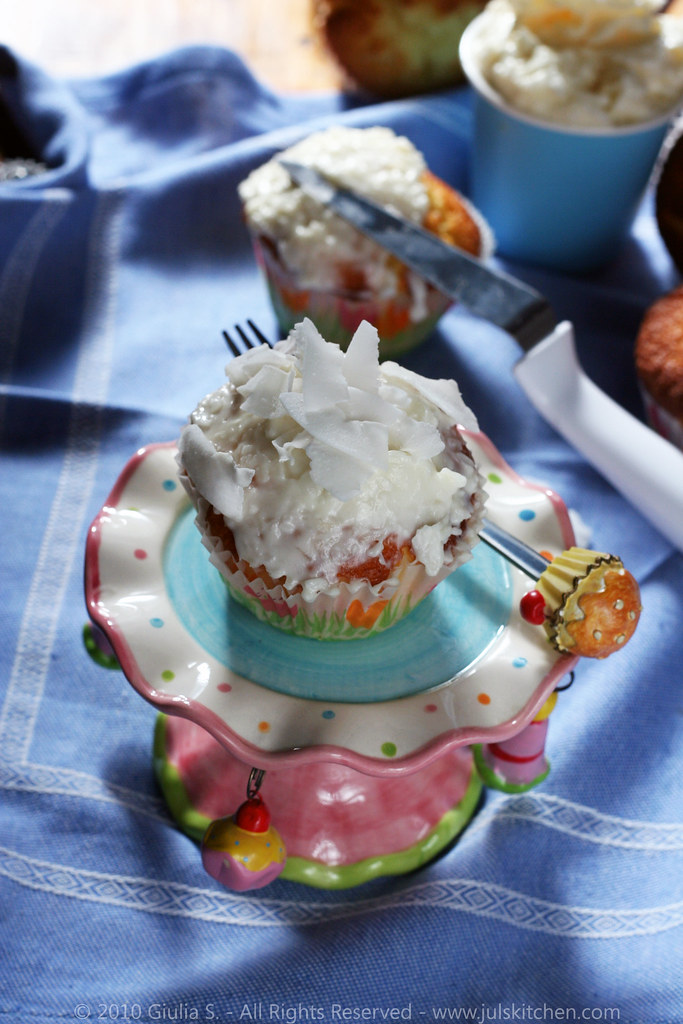