Those who follow me on Twitter or on the fan page of Juls’ Kitchen on Facebook know that this Valentine’s Day was an opportunity to finally have a Greek dinner … you may ask, and what about that? Simple, do you remind Toula from My Big Fat Greek Wedding? Well, I think I’m so similar to her! The bundle phase, being a girl with a single thick eyebrow, a little different from the blondie girls with their snack made of white bread and ham, getting shy and clumsy in front of representatives of the opposite sex ... But this means being strongly tied to my noisy and large family as well, an ancient and powerful force that flows through the veins of us, a passionate and creative relationship with food, part of our traditions, of our history and track for our future. 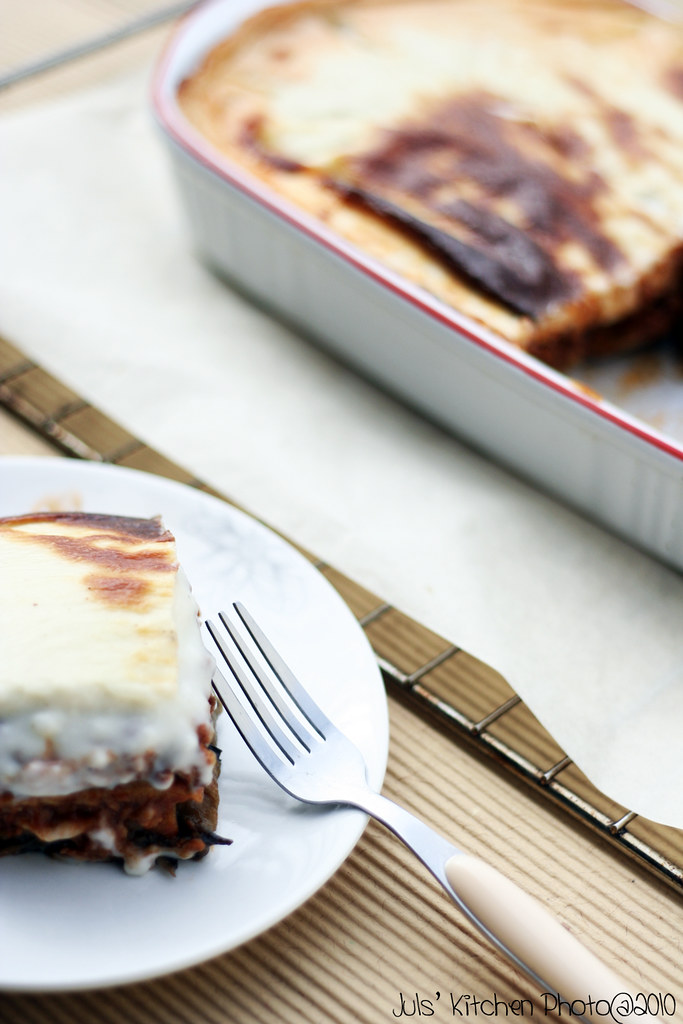 Here a quote from the movie, so fun:

What do you mean he don’t eat no meat?
Oh, that’s okay. I make lamb

In short, seized by the desire to play down this latest single Valentine’s Day, I put up a Greek dinner between friends and the main course – despite the dact that the eggplants are a little off-season, I admit – was the moussaka, made following step by step Tessa Kiros’ recipe from Falling Cloudberries, a world of family recipes. 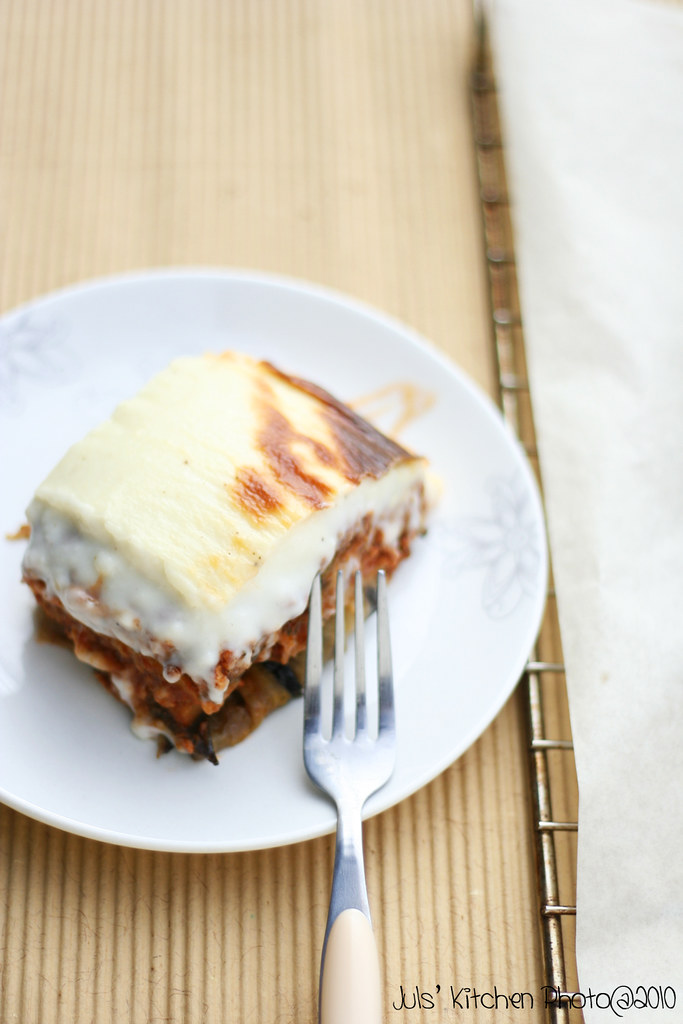 Remove stalks of eggplants, cut them lengthwise into slices 5mm thick. Sprinkle them with coarse salt and leave them in the sink or in a bowl with a weight on top for 30 minutes to release all the bitter liquid.

Heat 3 tablespoons of olive oil in a nonstick skillet. Saute the onion until it is soft and golden. Add parsley and garlic and cook for few minutes until you feel the smell of garlic, then add minced meat. Cook over medium-high heat, stirring frequently with a wooden spoon, until meat has lost its liquid and begins to darken. Add cinnamon, oregano and bay leaves, season with salt and pepper. When the meat is browned, add wine and scrape the bottom of the skillet to avoid meat to stick. Let evaporate much of the wine, then add  tomato sauce and simmer for about 30 minutes, without lid, stirring occasionally. If necessary add a bit of extra water.

Meanwhile, slice potatoes lengthwise into slices of 5 mm of thickness, pat them dry and fry in a nonstick skillet over moderate heat until they are golden on both sides. Transfer them onto a plate lined with paper towel and leave them there to remove extra olive oil.

Now is the time to return to the eggplants: rinse under running water to remove salt, squeeze extra water and pat them dry. Fry in hot olive oil until they are golden on both sides and soft inside. Put them on a plate with paper towel to drain extra olive oil.

Preheat oven to 180°C and take a large baking pan. Form a layer of eggplant (using half of the fried slices), overlapping them a bit to make a compact layer. Then make a layer of potatoes, being careful not to overlap this time. Now spread hald of the meat sauce in one layer over potatoes and cover again with plenty remaining eggplants. Spread a new layer of meat sauce. Press to compact layers.

And now, let’s make the bechamel. Melt the butter in a saucepan and add the flour whipping constantly to avoid lumps and pour over it hot milk. Add salt, pepper and nutmeg and continue cooking after it took the boil for 5 minutes, stirring, until it becomes smooth and thick. Pour a layer of bechamel with a spoon over the meat sauce layer.

Bake the moussaka in the oven for 45 minutes – 1 hour, putting your baking tin over a sheet of baking paper, because the moussaka tends to boil briskly and pour out of the tin. Let it cool a bit before serving and cut into square pieces. 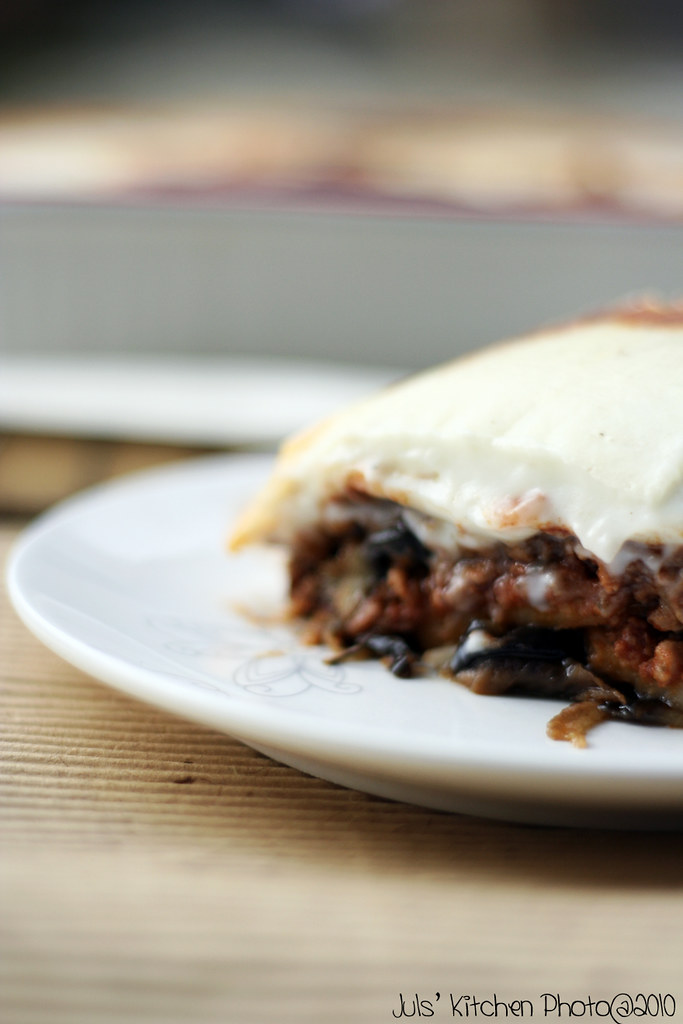 My opinion? I adored it right from the beginning, from the smell of garlic and parsley of the gravy, passing through the sizzle of  eggplant olive oil to the priceless feeling of cutting through each different layer of moussake with my fork to make a perfec and balanced bite. Stay tuned for my Greek dinner dessert!

Pork tenderloin with pancetta and thyme