The fireplace warms a room with its own unique warmth, the smell of burning wood is unmistakable. I don’t know if you have ever tried to warm up your bed and blankets with a pot of coals and a bed wagon. Long before the hot water bottle and the electric blanket, they would guarantee warmer nights to the farmers during winter.

In the evening they would collect glowing charcoals from the fireplace or from the stove and put them into a caldano, a earthenware pot which would be hung to the scaldaletto, a bed wagon which looked like a sledge, also known as prete, priest. The farmers would put the scaldaletto underneath the blankets and it would slowly release its warmth. Blankets were heavy and dead cold, they used to get also damp in the badly warmed bedrooms, so farmers would use the caldano and the scaldaletto to have a less shocking meeting with the freezing bed and blankets. 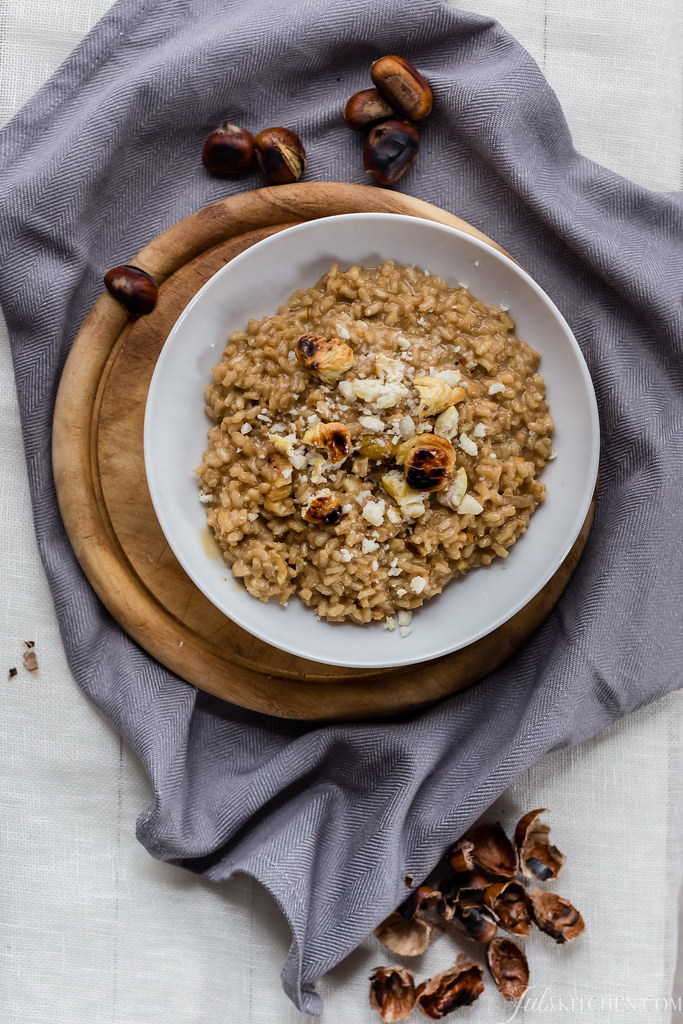 I grew up in a farmhouse, properly heated during winter, with modern, soft blankets. Yet, after a bad experience with the electric blanket – always, ALWAYS, remember to unplug it when you go to sleep – we started using the old caldano again. In the evening mum would put it in my bed then, when it was warm, she would move it to their bed. I would crawl into bed and after a while, relaxed and comforted by that unique warmth, I would fall asleep in a bed smelling like burning fire.

It was a different warmth, almost toasted, an ancient one which would linger on your skin and in your nostrils, the same warmth of the fire burning in the fireplace. 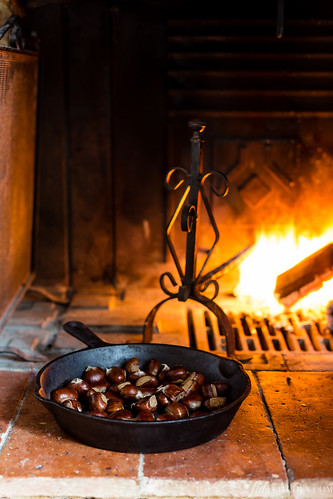 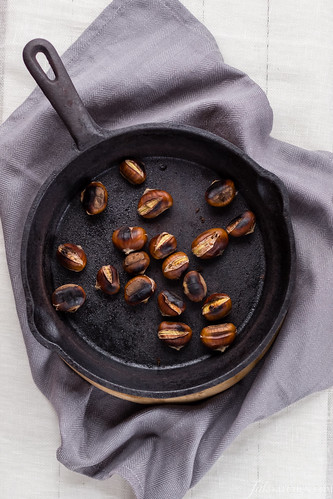 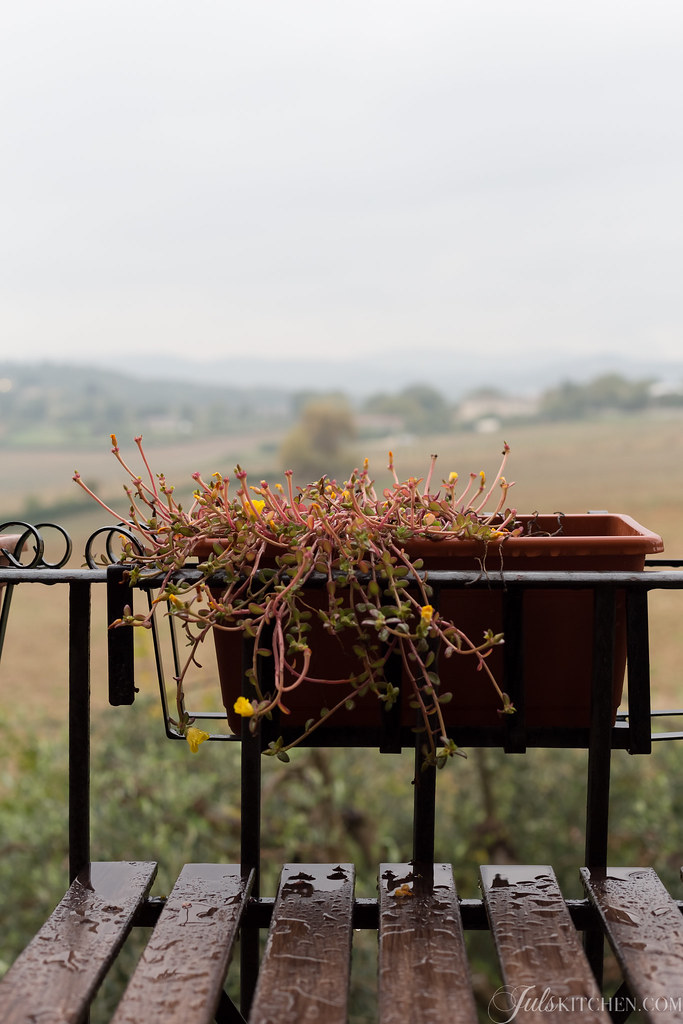 Autumn is back, along with rainy days and wind. The trees are changing their colours, freeing the yellow leaves and letting them dance in the wind. The house is quickly cooling down, and you feel the urge to turn on the stove. Sometimes the stove is not enough. It is not just a matter of heat, it’s more related to warmth, smell, memories. So we light up the fireplace, especially during the weekend, and immediately the atmosphere of the whole house changes.

The fireplace provides inner peace, his crackling brings joy. I might be biased, but it also makes me crave for cooking comforting and cozy recipes, just like a risotto… When I was still working in the office I would come back home tired, stressed and irritable almost every day. A risotto would bring back calmness in my mind and soul. The instinctive gesture of stirring a risotto was just like a therapy: I would channel my negative thoughts and my anxieties in that energetic stirring with a wooden spoon and soon every concern would disappeared.

Autumn, the fireplace and a risotto are a panacea for life. 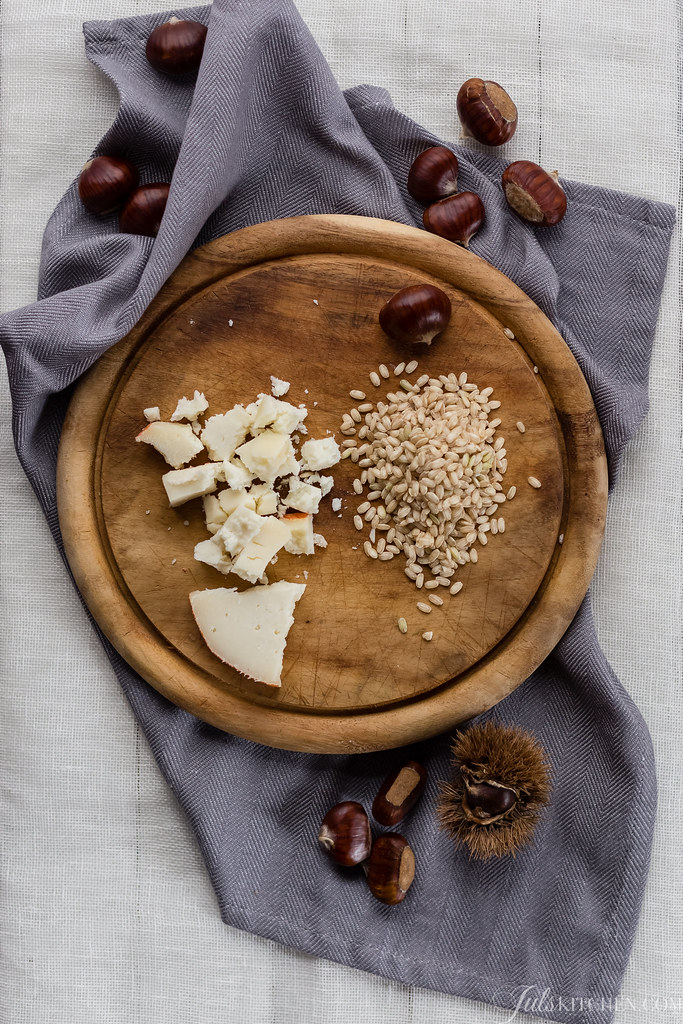 This risotto is affected by my late Tuscan tours in the last months. There are chestnuts from Mugello and some pecorino I brought back home from our last weekend in Val d’Orcia.

There are countless varieties of pecorino cheese in Italy. Pecorino just means made with sheep milk, so just imagine how many options cheesemongers have to create unique cheeses. There’s the Sicilian pecorino, the Sardinian pecorino, the Roman one, which you might know better than the others, assertive and almost piquant. I swear by the Tuscan pecorino, the cheese I grew up with. Last week I brought you on tour where the pecorino di Pienza is made, in Val d’Orcia. It has special characteristics that make it different from any other cheese. Pliny the Elder tells of sheep farms in Tuscany during Roman times, but it seems that they might be even older, dating back to Etruscan times.

Pecorino di Pienza has therefore ancient origins, it was a favourite of Lorenzo il magnifico. It is a cheese made from whole raw milk. The sheep are raised out in the open and graze exclusively on the local flora. The aromas of rare plants that grow in the clay soil (wormwood, meadow salsify, juniper, broom, burnet …) can be sensed in the sheep’s milk (from Pecorino di Pienza on Academia Barilla).

The milk is curdled either with veal rennet or vegetable rennet, known as pressura. This is the most ancient rennet known to men, it is still obtained from the stamens of wild artichokes that grow naturally in the area. This particular process produces a chalky cheese, which is fabulous when eaten on its own with fava beans, but also when used in cooking.

So that’s how I got the idea of ​​this risotto, traveling through Tuscany… 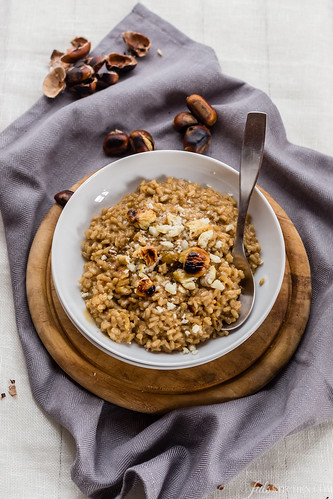 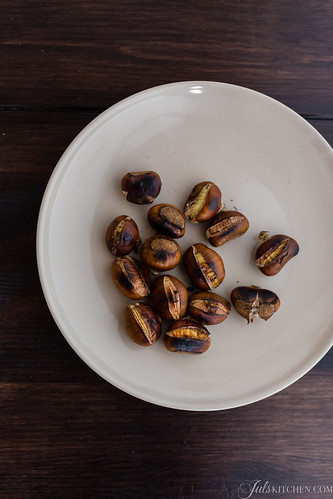 I chose a brown Arborio rice, one of the best Italian rices for risotto, to give a more rustic taste to the dish. Having a spoonful of this risotto is like taking a tour of the Tuscan areas I love: there are onions from Certaldo, juicy and sweet, an extra virgin olive oil from the Florentine hills, a semi-aged Pecorino from Pienza and a handful of bruciate, roasted chestnuts from Mugello. Will you join me in this Tuscan tour? 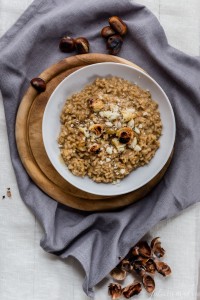 *I used a brown rice, which took almost 45 minutes and 1,5 liter of broth to cook. If you choose a white rice, such as Arborio or Carnaroli, halve the time and the amount of liquid required.
Tried this recipe?We love to see your creations! Snap a pic and tag @julskitchen and hashtag it #myseasonaltable! 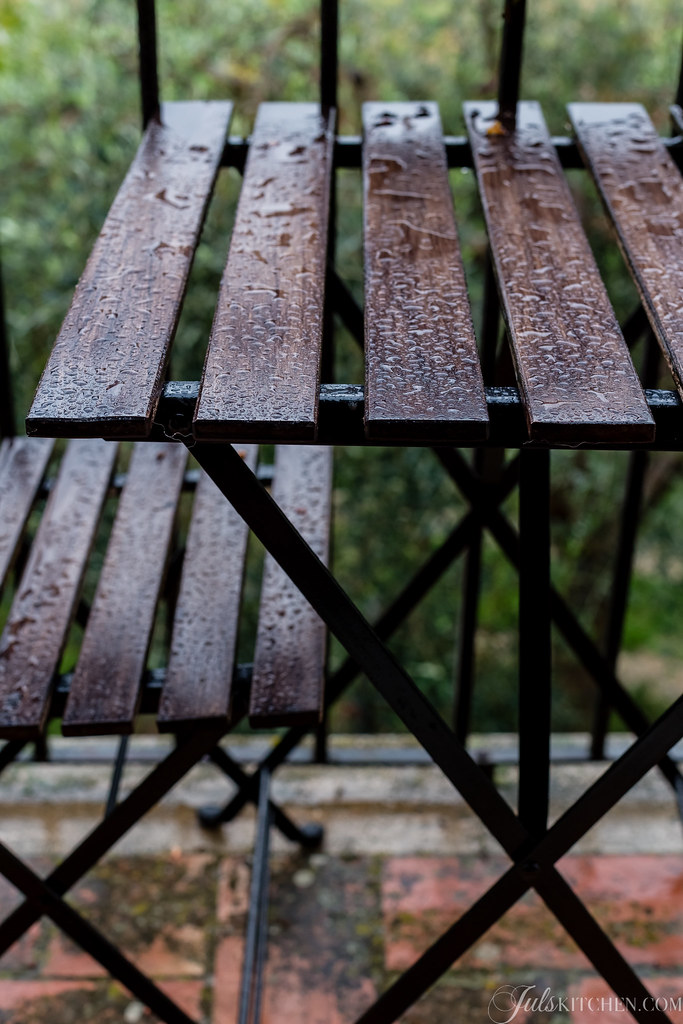 Rice timbale with pumpkin and sausage and the most important resolution

Pumpkin risotto. Valentine’s Day and a novice in the kitchen
cheesechestnutspecorinorice