For many Italians eating a lavish portion of spaghetti al pomodoro, with tomato sauce, is almost like coming back home after a long trip. It might be the way we twirl the spaghetti with a fork, a gesture which is written in our DNA. And if you ask, no, we do not use a spoon now, even though my grandfather, which was from the South of Italy, used to to do that. Now this would look and sound old fashioned.

It might be the tomato sauce, which every time carries out an attack to your perfectly white shirt, or the overwhelming basil aroma. It might be for the colours, so typically Italian, a stereotype that we embrace intentionally, and with satisfaction.

Everyone has his favourite tomato sauce: garlic or onion, basil or parsley, olive oil or butter. Oh, the stories that are concealed in a saucepan of tomato sauce! Generations of testing, addition and subtraction, traditions that gain strength or crash on the use of a clove of garlic. Not to mention the olive oil, the most representative ingredient of our country, the bass player of the tomato sauce, the backbone of a melody played by tomatoes.

Next to spaghetti al pomodoro, you will always find a mention to spaghetti aglio, olio e peperoncino, an elementary dish of spaghetti tossed with garlic, extra virgin olive oil and chilli pepper, a recipe you are supposed to master even if your knowledge of the Italian cuisine goes barely beyond the basics.

It is a simple dish which can be cooked at any time with what you have in the pantry, something to prepare late at night when friends show up unexpected at home, a bowl of pasta for small hours and large portions. The smell of garlic gently frying in the olive oil is like a spell, it takes you home wherever you are in the world.

It is the poorest dish you can imagine: just extra virgin olive oil, garlic, chilli pepper and a package of dried spaghetti, something which every Italian is supposed to store in his pantry. If it is done by the book, though, it reaches levels of absolute perfection: the pasta is soaked by the taste of garlic infused olive oil and the chilli pepper tickles your taste buds without covering the other flavours. Then comes the parsley, fresh, finely sliced, the green touch that the pasta was missing. The spaghetti with garlic, olive oil and chilli peppers are suitable as a base to add other ingredients at the very last minute: cherry tomatoes, mussels or clams, never cheese, though. 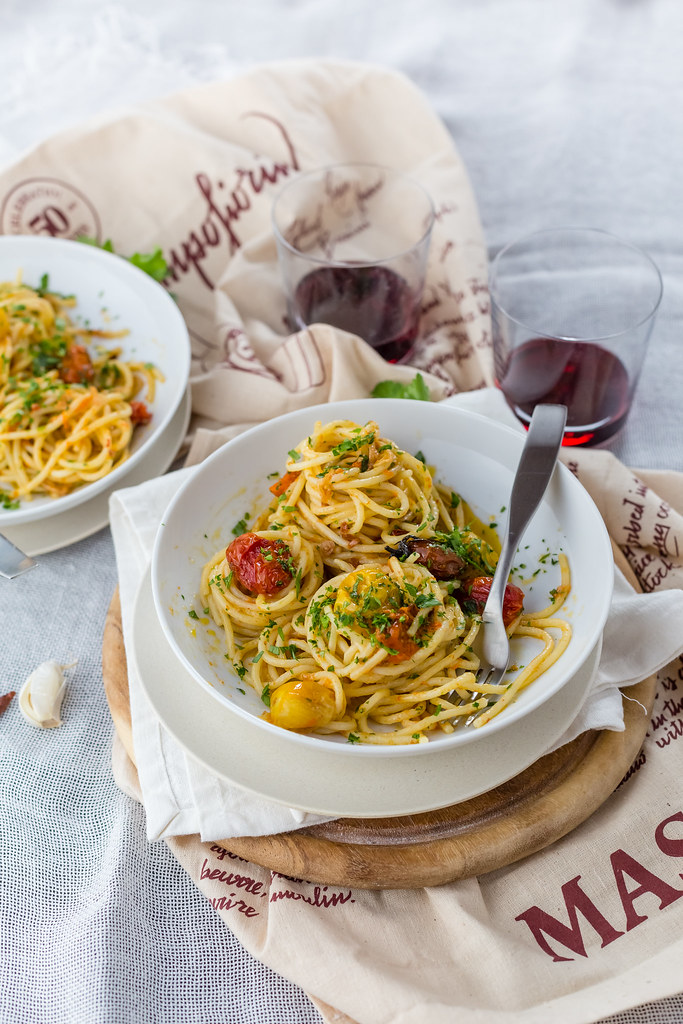 Preparing this recipe is like concentrating summer in a dish. The slow-roasted tomatoes are cooked slowly in the oven to deepen their sweet flavour. Choose tomatoes of different colours – yellow, red, brown… – so that they will also give an unusual chromatic appeal to your spaghetti.

Once the slow-roasted tomatoes are ready, you can store them in the fridge for several days. Add them to the most classic of the Italian dishes, spaghetti with garlic, olive oil and chilli pepper, for am easy and flavourful summer dish.

A new recipe for Masi Campofiorin50. 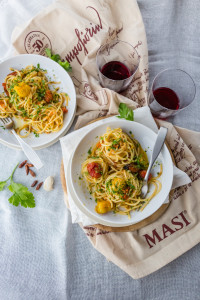 Ingredients for the slow-roasted tomatoes

Ingredients for spaghetti with garlic, olive oil and chilli pepper 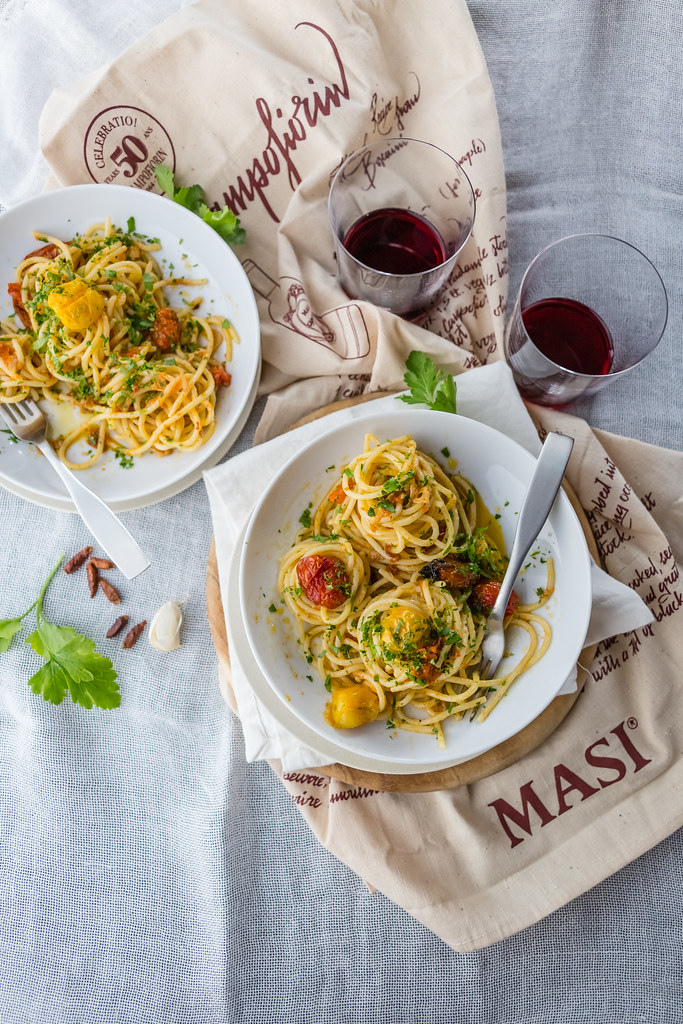 Pasta with fried eggplants and my September good intentions

How do you learn to cook? and a simple arugula pesto