I walked in the summery countryside, rejoicing with the warmth of the sun colouring my skin. I picked up wild flowers to soak them overnight and make St. John’s water, a magic and flowery water you use the day after to wash away tiredness, sadness and negative thoughts. I sat on my balcony at dusk, in the dark, listening to the crickets and to the countryside playing its night melody, with a cinnamon gelato all for myself. I savoured it slowly, letting it melt on my tongue, sending heartfelt thanks the day just passed. 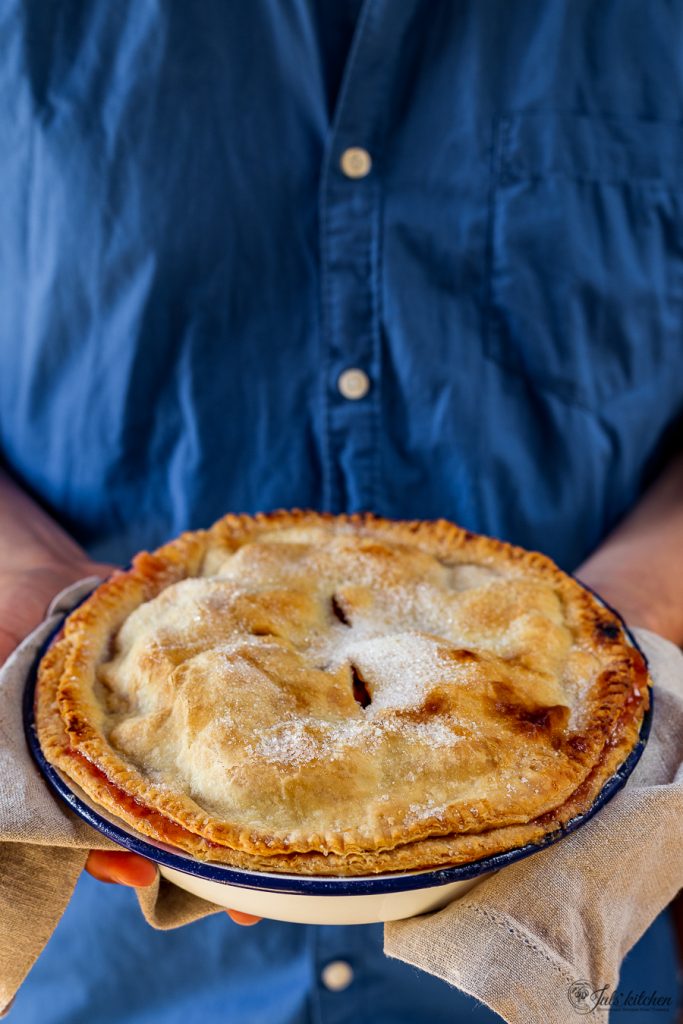 I cooked with passion, fun and curiosity, reaching almost the end of the long list of recipes for the book. I filled the kitchen with fruits and vegetables, because after cooking sausages and lentils for photographic needs all I wanted was a bowl bursting in the colours of melon and peaches. I spent four days working with him among recipes, photos and videos. They seemed holiday days more than working days. The blessing of doing a job you love.

I walked into a golden wheat field, stroking the almost ripe ears of wheat first with my eyes and later with open hands. I felt the summer running through my veins. This made me excited and impatient to share with you some of my projects, as to celebrate the season of sun with a proper pie. 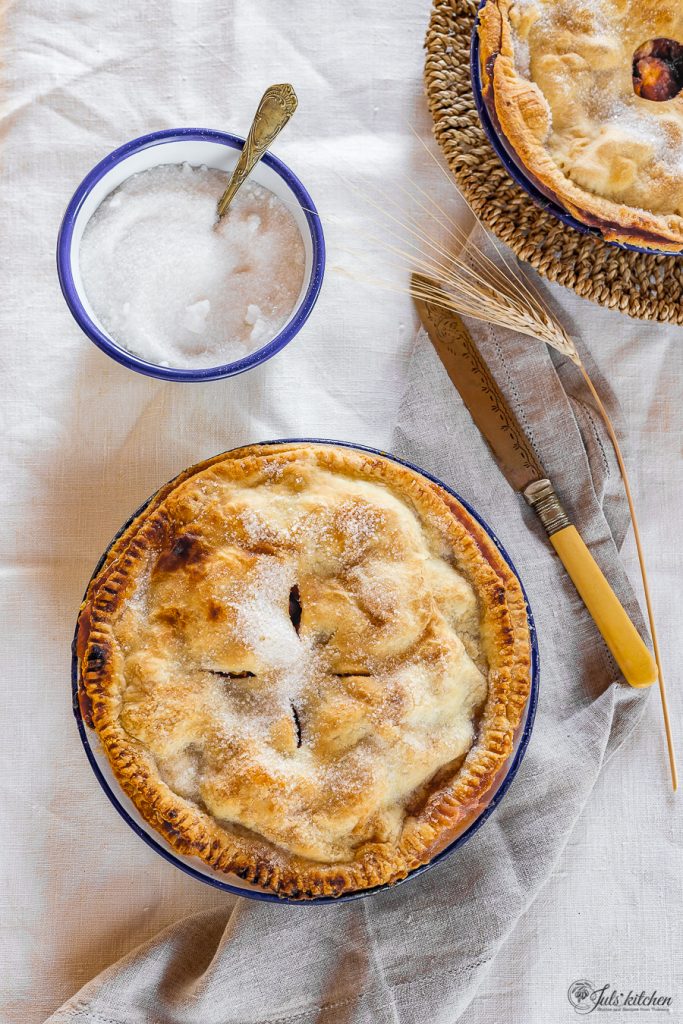 Let’s start with the juiciest part, the peach pie. A few weeks ago I found online this never-more-without book, Bubby’s Homemade Pies

, which disclosed me the fascinating and homey world of American pies.

When I was a little girl I used to read every week Mickey Mouse comics cover to cover, dreaming to bake, when I would have been old enough, fragrant apple pies just like Grandma Duck. I would have let them cool on the windowsill of the kitchen. There’s no other reason to have a windowsill, right? Then I found the perfect recipe: a crisp pie crust, flaky and light, so easy that ten minutes are enough from measuring the ingredients to stashing it into the fridge.

The crust is so perfect that it does not steal the show to the juicy filling, generous with seasonal fruit, warmed by a pinch of spices. Once you get familiar with the making of the perfect pie crust you can have fun trying different fillings, varying them following the flowing of the seasons. My favorites? Strawberries and rhubarb, apples and blueberries, and peaches of course.

A lot of peaches, a whole basket. I caressed and smelled them for days, velvet under my fingers. I was afraid that if I cooked them I would lose their intense fragrance, though this pie instead gives you back their full flavour, an intoxicating and summery smell enhanced by a hint of cinnamon. This is a celebration of summer and the memories that I will keep with me when the seasons will change. 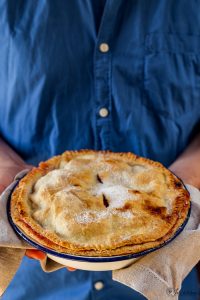 For the pie crust 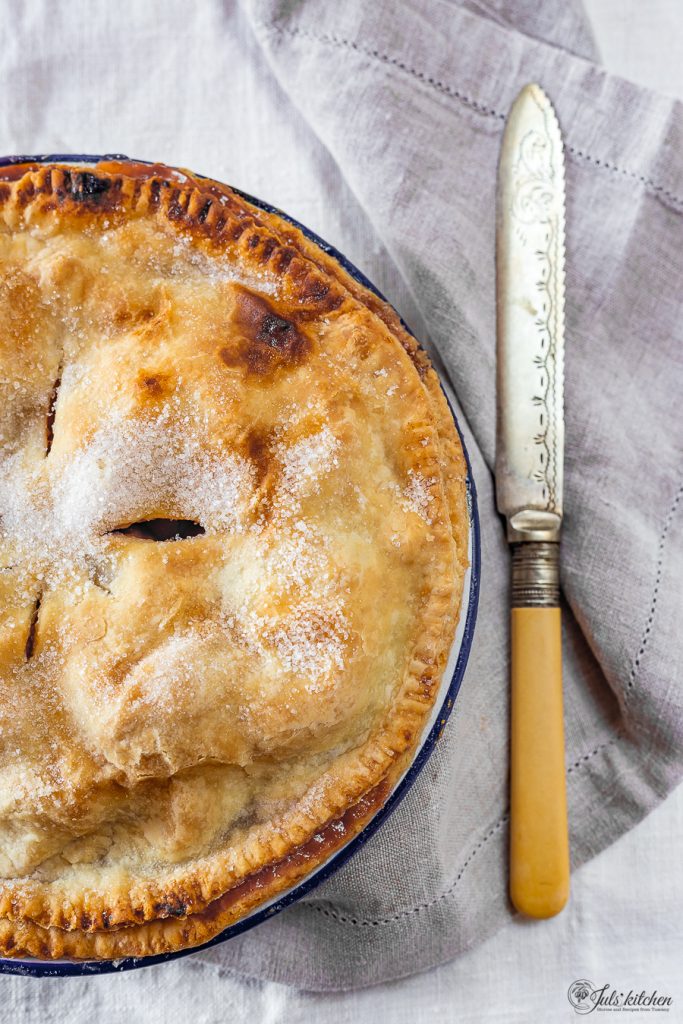 After years of photos and recipes it was about time to play with video recipes, too. Tommy has abandoned his favourite role of official taster. His hands, strong in kneading bread and one of my favourite photographic subjects when it comes to shoot cakes, are now the director’s hands behind the camera.

While outside the sun was shining relentlessly on the golden wheat fields, while the wind flung open the windows, waving the flowers and my hair, we shot our first video recipe, choosing this peach pie to celebrate summer and to keep a memory of a day spent laughing and pretending to be on a tv set, he gazing serious at the camera, me nibbling slices of juicy peach when he was not looking at me.

A peach pie to celebrate Summer from Giulia Scarpaleggia on Vimeo.

Here we go. I reached almost the end of the eight chapters of the book, cooking my way through eggs, local fish, cheap cuts of meat and stale bread. I can not resist anymore, I’m dying share with you the title, the cover and the leading philosophy of the book. So, here we are.

The title can be roughly translated into “Cook as a chef with low cost ingredients“. It will be released mid-September, the delivery of the final manuscript is … er, in a few days.

The main theme of the book, as you can tell from the title, is the cucina povera, the peasant’s cooking, unsophisticated, the recipes of the families who would put on the table a feast from a few ingredients, the dishes of osterias and country inns, where you could find the menu hand-written on a sheet of yellow paper. It is a cuisine that is never boring, but creative, vital, innovative and traditional at the same time, a style of cooking which has time and organization as main ingredients.

I shared recipes, photos and tips to depict a vivid image od a cuisine without frills but never predictable, sustainable, local, seasonal.

Ultimately it is what I’ve learned with these 5 years of blogging. Appreciate and celebrate the season, buy your food at the market or from your butcher. Talk to him, with the fishmonger, with the farmer… take some advice and do learn from their knowledge, then pass what you’ve learnt to your neighbors, your family and friends. 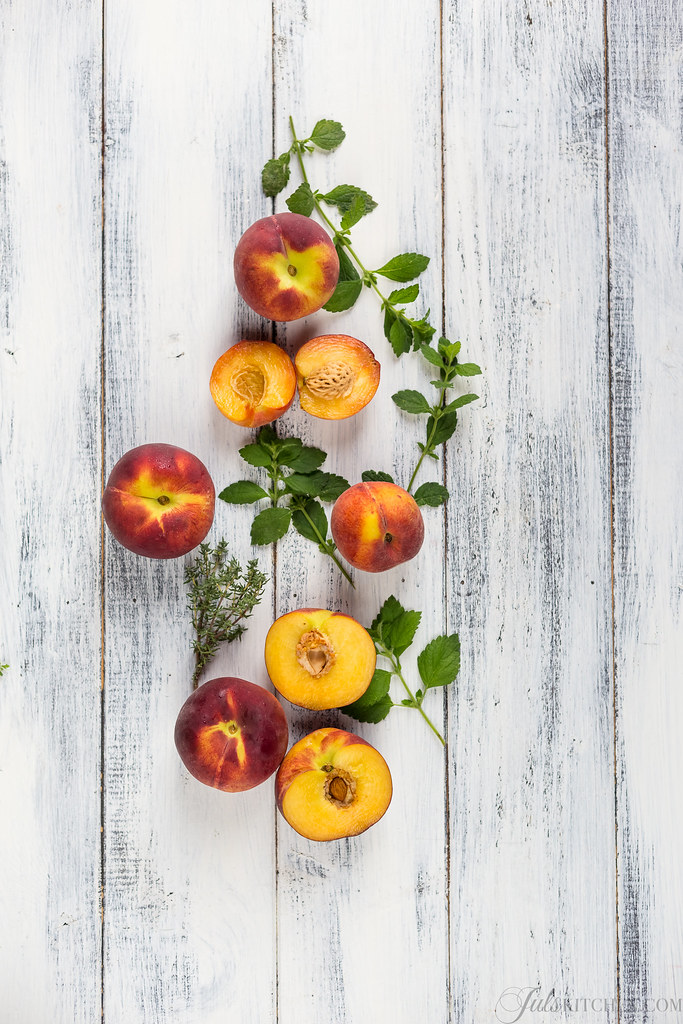 Where the lemons are sweet and the smiles are true: lemon bundt cake

Fresh peach tartlets, for those who are young at heart

Whole wheat crostata with lemon marmalade. It took me some time to fall in love with crostate.
buttercinnamonpeachsugar