Those speedy savouries, made with the ingredients I found in my fridge, are based on a Cavoletto recipe, but they are rearranged according to some absences: no cream, no taleggio cheese, no time to make the brisée.. but I had some puff pastry!
I used the last leeks I had, but they were really small, so let’s make savouries for two people! 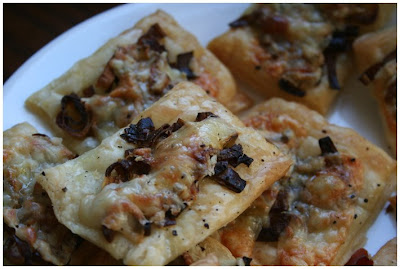 Once the puff pastry is defrosted, roll out the dough and cut it in little squares. In the meantime, in a frying pan melt the butter and add the sliced leeks (white and green part), a teaspoon of cumin, salt and pepper and let it stew until they’re soft (not more than 5 minutes).
Put a tablespoon of leeks on every puff pastry square, slice some pecorino cheese over it and some grinded pepper, then some drops of good extra virgin olive oil.
Bake in a preheated oven until they are golden and crisp.
Eat them warm!